The Tesla Model S is one of the most talked-about models in the electric car market, and for early EV adopters who want to get noticed a combination of searing acceleration and a hi-tech cabin will hold plenty of appeal.

If you can live with the Tesla’s (relatively minor) range limitations, it’s one of the most rewarding all-electric experiences around – especially if you pay company car tax. And perhaps surprisingly, while it’s loaded with digital technology and has a futuristic feel, the Model S is roomy and practical too.

A Model X SUV is also on sale, along with the cheaper and relatively affordable Model 3. This, however, has suffered from issues at the factory, with the company struggling to meet its production targets as it aims to fulfil half a million orders.

While top models are priced in the same ballpark as the Mercedes S 500 Plug-in Hybrid and the Porsche Panamera S E-Hybrid, the all-electric Model S can outperform them both in acceleration terms. Of course, the downside is that the Tesla needs to be regularly tethered to a charger while its rivals can run on petrol by simply popping into a filling station.

Of all the electric cars on sale, the Tesla Model S is the one that has made EV ownership desirable. Yes, cars like the Nissan Leaf and Renault Zoe have made it accessible, but the Tesla Model S is a car that people have wanted to own ever since it was launched in 2014.

In terms of size, the Model S falls into the executive sector, but while the five-door hatchback body is fairly conventional, it has lots more space than many rivals, thanks to the compact packaging of the electric drive system. There's also extra luggage space under the bonnet where an engine would normally reside.

Constant updates to the Model S mean the current range is quite different to that when it was launched. The current range was given a facelift in 2016 that saw the nose lose its fake grille, which brought the S into line with the Model X SUV. Tesla gives different versions of the Model S a number to identify them. In the past this has included 60, 60D, 70, 70D, 75, 75D, 85, 85D, P85+, P85D, 90, 90D, P90, 100D and P100D versions. The numbers signify the kWh (kilowatt-hour) rating of the lithium ion battery pack, and the larger the number, the longer the range and also the more powerful the Model S is.

The other identifier on the tail of the Model S is the addition of a 'D' to the model name. This doesn't mean diesel like it does on an internal combustion-engined car, instead it stands for Dual, and indicates two electric motors are fitted to give the car four-wheel drive. 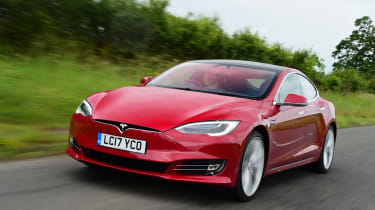 Two versions are now currently available. At the top of the range, the Model S Performance enables maximum acceleration, with a claimed 0-60mph time of 2.3 seconds, so this electric executive is faster than nearly every other car on the road – even the world's quickest supercars. The Long Range variant is no slouch either, with a sprint time of 3.7 seconds and with the added ability to cover slightly more ground on a single charge.

As well as Tesla's innovative all-electric powertrain, the Model S also benefits from a hi-tech interior. It's dominated by the vast 17-inch TFT portrait screen that controls all interior functions, while the driver gets their own 12-inch TFT dials ahead of them. Other clever features include WiFi connectivity – which allows over-the-air software updates of the assorted tech on board – keyless entry with door handles that sit flat with the bodywork when not in use, plus the usual executive additions such as voice control, a rear camera, heated electric seats and a raft of active safety tech like automatic emergency braking and collision avoidance.

Probably the most controversial feature on the Model S is Tesla's Autopilot. It's at the cutting edge of autonomous driving technology, but the name is a little misleading, because the driver cannot hand over complete control of the car to the electronics. However, it does allow for an element of 'hands-free' driving, on the motorway especially, although the driver does need to maintain concentration on the road ahead in case the electronics do miss something.

As the Tesla Model S is such a unique proposition, it's difficult to name rivals to it. The Porsche Panamera offers similar performance, and there's hybrid versions on offer for buyers wanting performance and some semblance of fuel economy. The Mercedes S-Class is available as a hybrid, too, and it can match the Model S for space and refinement.

Prices for the Model S range from around £78,000 to almost £93,000 for the Performance model, although while the initial purchase price is steep, everyday running costs are minimal. Tesla offers fast-charge options you can install at home, while its Supercharger network offers rapid high-voltage charging that will help cut your costs.

For an alternative review of the latest Tesla Model S Saloon visit our sister site carbuyer.co.uk