The Range Rover Velar is the SUV of the moment. Its slippery shape and stunning interior make it ultra desirable, but it’s the first Range Rover to heavily prioritise form over function. There’s a good selection of engines, but be aware of tight rear seat passenger space and high list prices. The Velar may well start at a a shade over £45,000 but you’ll be spending a lot more than that for a Velar with all the kit you’d want. That said, who said style and fashion come cheap?

The Velar name goes back to the 1960s, when it was used as an alias to disguise original Range Rover prototypes. As such the new Velar wears possibly the oldest name in the Range Rover line-up.

It plugs the gap between the Evoque and the Range Rover Sport, meaning that there’s now less of a gulf between Range Rover’s entry-level offering and its larger SUVs. It also cuts a more individual shape compared to the rest of the line-up, with a new design language and a rakish roofline. It doesn’t quite occupy a new coupe SUV position, but it’s easily the closest Land Rover has come to filling that niche.

The Velar’s position in the range and its overall shape means that it covers plenty of bases, and as such it enters the market with a wide variety of rivals in its sights. This is a car that goes up against the likes of the Porsche Macan, Jaguar F-Pace and Volvo XC60 as well as the BMW X6 and Mercedes GLE Coupe.

There’s a wide spread of diesel and petrol choices when it comes to engines, although the most basic and cheapest Velar is only available with a 178bhp 2.0-litre turbodiesel. 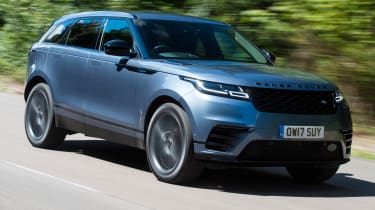 Petrols kick off with two 2.0-litre four-cylinder engines, one producing 247bhp (badged P250) and the other making 296bhp, named P300. The 5.0-litre V8 found in the SVAutobiography Dynamic Edition is badged P550 and boasts 542bhp.

While the styling will be one of this new car’s biggest draws, the cabin and tech is all-new as well. The Velar boasts the latest Jaguar Land Rover infotainment systems, with the new Touch Pro Duo system the highlight. Twin 10-inch touchscreens stack on top of each other in the centre console and dashboard, while digital dials also mean that the Velar’s interior is fresh and modern.

For an alternative review of the latest Range Rover Velar SUV visit our sister site carbuyer.co.uk