The next Volkswagen Golf R hot hatch is being pushed through the final phases of development ahead of its expected launch later this year, and the newcomer has now been spied with no disguise at all.

These latest spy shots reveal the new Golf R’s exterior styling in full. Like its predecessors, it’ll remain one of the most understated hot hatchbacks on the market. The body kit looks broadly similar to the styling pack found on the regular Golf R-Line, with only a couple of telltale additions.

Updates include a tweaked front bumper with new diagonal struts, broader side skirts with protruding aero vanes and a subtly redesigned rear bumper with an uprated rear diffuser and a larger-bore quad-exit exhaust. Its ride height is also significantly lower than the standard Golf’s, while larger, R-branded discs and calipers hide behind the car’s alloy wheels.

Volkswagen will also fit the Golf R with a pair of unique headlights, which bear a fresh design signature compared to the lesser-specced hatchbacks – and which will also likely employ the brand’s Matrix LED lighting technology. Finally, at the rear, there’s a larger tailgate spoiler.

Our latest spy shots also offer our first look at the new Golf R’s interior which, save for a new sports steering wheel and a pair of R-branded bucket seats, looks very similar to the standard Mk8 Golf’s. Buyers get the same 10-inch digital instrument binnacle and central infotainment screen – and the same capacitive controls for the heating and ventilation system. 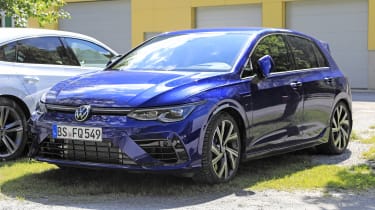 Volkswagen’s latest Golf R will be powered by the same engine as the Golf GTI – a turbocharged 2.0-litre four-cylinder petrol unit, codenamed “EA228” – although, it’ll have much more power than its lesser-badged sibling.

A recently leaked internal document suggested that the latest Golf R will have an output of 328bhp. As such, it’ll be the most powerful version yet, boasting an extra 32bhp over the previous-generation model. This output will also suitably distance the range-topping Golf R from the mid-range Golf GTI, which produces 242bhp.

Other technical details are yet to be confirmed, but we expect the Golf R will send its power to Volkswagen’s familiar 4MOTION all-wheel-drive system via a seven-speed DSG gearbox only – no manual version of the Golf R is anticipated this time. The 0–62mph sprint should take around 4.5 seconds, while top speed will be electronically limited to 155mph.

It’s likely that the Golf R will be revealed later this summer with UK sales likely to commence in early 2021. When it reaches Volkswagen showrooms, prices are likely to climb, given the extra power and new on-board technology. We anticipate a starting price of around £37,000.

What does the new Volkswagen Golf R have to beat? Check out our list of the best hot hatchbacks on sale now…