Land Rover has released more details of the commercial version of the new Defender. The new Defender Hard Top will go on sale later this year with indicative pricing for the short-wheelbase three-door 90 version starting at £35,500 plus VAT.

The longer 110 version is likely to cost just over £40,000 plus VAT and Land Rover will be hoping that the commercial Defender will compete strongly at the more utilitarian end of the 4×4 market against the likes of the new Ineos Grenadier and the current crop of pick-up trucks.

The Hard Top name dates back to the 1950s when removable Hard Tops were developed for early Land Rover Series models to provide added security and protection. The new model ensures the new model continues with the same silhouette of the early cars.

The commercial-oriented Defenders are being developed by Land Rover Special Vehicle Operations and don’t skimp on kit, either. They use the passenger models’ aluminium-intensive architecture  – said to be three times stiffer than the best body-on-frame structure – with independent coil-sprung suspension and adjustable air suspension available on the larger model. 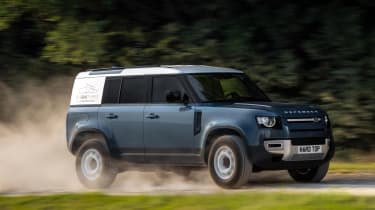 Although further technical details will be released with firm prices later on in the year, we do know that both models will have a wading depth of 900mm, while the 110 version will have approach, breakover and departure angles of up to 38, 28 and 40 degrees respectively in the Off-Road setting.

Like the passenger versions, Land Rover’s 10-inch Pivi Pro touchscreen will be fitted, while advanced Software-Over-The-Air (SOTA) capability will be able to update many of the car’s systems. Other tech available includes the ClearSight rear-view mirror, which relays an HD camera feed in place of a mirror – handy if the rear load bay is full.

Advanced Tow Assist will also be available, allowing drivers to manoeuvre the car in reverse using a rotary controller in the centre of the car. A 3D surround camera will also help with tricky manoeuvres, presenting an all-round view of the car on the central screen.

Although the Defender Hard Top does without a second or third row of seats, it will be available with a central jump seat so three people can sit in the front. Land Rover is also promising a host of extras available for businesses to personalise their Defender Hard Tops. Michael van der Sande, Managing Director of Land Rover Special Vehicle Operations, said, “We will maximise the functionality and usability of New Defender’s cargo area, with tough materials and clever storage solutions to ensure it surpasses the capability of any previous Defender Hard Top.”