Porsche has unveiled an entry-level, rear-wheel drive version of the all-electric Taycan for the Chinese market. It’s available to pre-order now, with prices starting from ¥880,000 (roughly £100,000).

The entry-level Porsche Taycan is powered by a single permanent-magnet motor mounted on the rear axle. The motor has a maximum output of 469bhp with Porsche’s overboost function activated, providing a 0–62mph time of 5.4 seconds and a top speed of 143mph.

Buyers have their choice of two battery packs. As standard, the entry-level Taycan comes with a 79.2kWh battery pack, which Porsche says provides an NEDC range of 257 miles. The same 93.4kWh battery pack from the flagship four-wheel drive variant is available as an optional extra, which raises the car’s claimed NEDC range to 304 miles.

The base-model Taycan comes with a domestic 11kW wallbox charger, which should fully recharge the larger battery pack in around nine hours. The car’s platform is also compatible with commercially available DC fast chargers, which allows both batteries to recover an 80 per cent charge in just 30 minutes.

To help keep the entry-level Taycan’s starting price low, Porsche has stripped away some of the flagship car’s chassis technology. So, it comes with smaller 19-inch alloy wheels, slightly smaller brakes and steel springs rather than air suspension – although the latter is available as an optional extra. 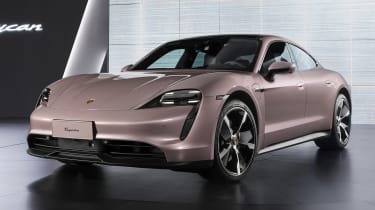 Inside, Chinese buyers get a pair of 14-way electrically adjustable sports seats, dual-zone air conditioning, a panoramic glass roof and three digital screens for the car’s gauge cluster, infotainment functions and climate control system. Also, thanks to the removal of the front electric motor, the base-model Taycan’s front luggage compartment swells to 491 litres.

The base-model Taycan’s options list is even more extensive than the flagship car’s, with buyers being offered an extra touchscreen for the front passenger, seven extra body colours, a choice of alloy wheel designs, a range of upholstery finishes and fresh head-up display, which makes its first appearance on this new entry-level variant.

Porsche is yet to confirm whether the new entry-level Taycan will be sold in the UK. But, given the growing appetite for all-electric vehicles, it’s likely that Porsche will introduce it to the European market later in the year.

What do you make of the new entry-level Porsche Taycan? Let us know in the comments section below…