Hyundai has confirmed further details on the revised Santa Fe SUV’s powertrain line-up, which will feature a diesel, mild-hybrid and – for the first time – a plug-in hybrid powertrain.

The refreshed Hyundai Santa Fe will go on sale in the UK in September, with prices starting from around £40,000. First deliveries are expected to arrive towards the end of the year.

The plug-in hybrid Santa Fe’s powertrain will comprise a turbocharged 1.6-litre four-cylinder petrol engine, a 90bhp electric motor and a 13.9kWh lithium-ion battery pack – which offers a combined maximum output of 261bhp and 350Nm of torque. However, it’s not due to reach the UK market until early 2021.

So, for the time being, the only electrified powertrain available is a 227bhp mild-hybrid petrol unit. It’ll be on sale from the SUV’s launch and uses the same 1.6-litre engine as the plug-in model, albeit with a slightly less powerful electric motor and smaller 1.49kWh lithium-ion battery pack. Hyundai also says that it’ll be available with either front- or four-wheel drive.

Finally, buyers have the option of a turbocharged 2.2-litre four-cylinder diesel engine, with an output of 199bhp and 440Nm of torque. Unlike the Santa Fe’s outgoing diesel unit, this new engine is made mostly from aluminium, which has shaved 19.5kg off the car’s kerb weight.

The diesel also has a new fuel injection system and improved internal components, which help to reduce the engine’s friction and improve fuel economy. The powertrain is mated to a new eight-speed dual-clutch automatic gearbox – and, like the hybrids, buyers can choose from either front- or four-wheel drive.

For the first time, Hyundai’s four-wheel drive system is fitted with a terrain mode selector, which offers specific setups for snow, gravel and mud. The drivetrain also comes with three driving modes – Eco, Comfort and Sport – which can deactivate drive to the rear axle to improve fuel efficiency or distribute the engine’s torque across the SUV’s axles for extra stability, sending either 35 per cent or 50 per cent of the engine’s power to the rear wheels.

Hyundai refers to this tweaked Santa Fe as a facelift – but it’s much more than a simple bumper and trim update. It’s actually based on a completely different platform to the outgoing model, with Hyundai adopting the same strategy that Land Rover did with the latest Discovery Sport. 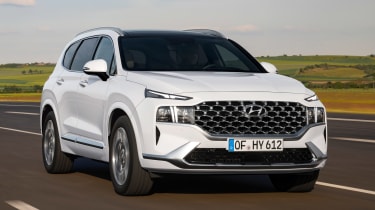 The Santa Fe now shares the same platform as the US- and China-only Sonata saloon, which has added support for Hyundai’s latest chassis technology and interior equipment.

Due to the platform switch, the Santa Fe has increased in size. It’s 15mm longer, 10mm wider and 5mm taller than the model it replaces, with dimensions of 4,785mm, 1,900mm and 1,685mm respectively. Hyundai says this has unlocked more space in the cabin for passengers, adding an extra 34mm of legroom for rear-seat occupants.

Hybrid and plug-in hybrid models will come as standard with a set of aerodynamically efficient 19-inch alloy wheels, although buyers can have 20-inch alloys as an optional extra. There’s also a choice of three new paint finishes – Glacier White, Taiga Brown and Lagoon Blue – bringing the SUV’s number of colour options to nine.

Inside, there’s a new floating centre console, a new gear selector and a host of extra storage bins. Hyundai has also fitted a new 12.3-inch digital instrument cluster and 10.25-inch infotainment screen with wireless support for Apple CarPlay and Android Auto – and, like the old model, a head-up display is available on the higher-specced Premium SE variant.

Hyundai has given the Santa Fe’s safety technology a boost, too, with the company adding its Highway Drive Assist 1.5 semi-autonomous function, which can assume control of the car’s steering, throttle and brakes on the motorway. Buyers also get lane-keeping assist, blind-spot collision avoidance and an autonomous parking system.

In addition, there’s a new reverse parking collision avoidance system, which uses the SUV’s rear camera and parking sensors to detect obstacles when reversing. Like most parking sensor systems, it’ll provide an audible warning for nearby objects – but if the driver gets too close, the system will automatically apply the brakes to prevent damage to the vehicle.

There’s a new Remote Smart Parking Assist system, too, which allows the driver to remotely move the SUV into a tight parking space using the key – without being in the car.

Hyundai says its upgraded underpinnings also give the new Santa Fe better handling and improved crash safety, thanks to its extensive use of high-tensile steel and its redesigned crumple zones. Refinement should also be improved, with Hyundai fitting additional sound dampening in vibration-sensitive areas such as the engine bay and suspension towers.

What do you make of the new Hyundai Santa Fe? Let us know in the comments section below…