The Geneva Motor Show will not be held in 2021 due to the financial difficulties caused by the coronavirus pandemic as well as poor turnout from the world’s motoring manufacturers.

After the cancellation of this year’s Geneva Motor Show, the event’s organisers requested a loan from the Swiss government to help offset the losses incurred, which are valued at an estimated 11 million Swiss Francs (roughly £9.4 million).

In early June, the Swiss government granted the event’s organisers a 16.8 million Franc (£14.3 million) bailout – but the loan has been rejected by the Geneva Motor Show’s board, as the repayment terms would cripple the event’s finances further.

The first repayment of 1 million Francs (around £850,000) was due in June 2021. Another of the terms of the agreement was that a Geneva Motor Show had to be held next year, which became unlikely due to the unwillingness of the world’s motoring manufacturers to participate following a survey by the show’s organisers. 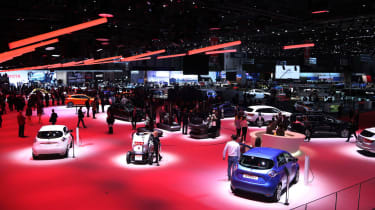 The survey also revealed that many global car brands would prefer to have the event in 2022, to give them enough time to recover some of the losses suffered during the pandemic.

Due to this chain of events, the Geneva Motor Show’s Foundation Board has voted in favour of the event’s sale to Palexpo SA, which is the organising board who manages the motor show’s yearly venue.

The sale would transfer all of the event’s rights to Palexpo SA and hopefully save the motor show from dissolution. The Geneva Motor Show remains the largest public event in Switzerland – and its removal from the calendar would negatively impact the Swiss economy by an estimated 200 million Swiss Francs (around £171 million) per year.

Are you hopeful for the Geneva Motor Show’s return in 2022? Let us know in the comments section below…