Audi has launched a facelifted version of the Q5. The revised SUV features a handful of design and technology tweaks, which Audi hopes will keep it competitive with the likes of the BMW X3, Mercedes GLC and Jaguar F-Pace. It’ll go on sale in July, priced from £42,950, with first deliveries due to arrive in September.

The cosmetic revisions are fairly restrained. Styling changes include new LED headlamps, a slightly narrower radiator grille and a tweaked front bumper, with larger air intakes. Audi has also fitted a pair of reprofiled side skirts – and at the rear, there’s an updated diffuser and a different trim-piece between the car’s new OLED tail lights.

Audi also offers a few trim-specific styling tweaks for the revised Q5. For example, the Sport model comes with a chrome grille surround and silver skid plates, while the S line variant features a honeycomb grille and chrome strip for the rear diffuser. Audi has also added a pair of new paint finishes to the Q5’s colour palette – District Green and Ultra Blue.

Interior revisions are equally subtle. The only noticeable difference is the larger infotainment system, which has been upgraded from an 8.3-inch to a 10.1-inch unit. The previous Q5’s centre console rotary control knob has also been replaced by a storage bin.

Like with the old model, Q5 buyers will still be offered a 12.3-inch digital instrument binnacle as an optional extra, along with an interior ambient lighting package and a head-up display. The digital gauge cluster is an updated version of the outgoing SUV’s – and Audi says it offers 10 times the computing power of its predecessor.

Prices for the S line model will start from £45,935 – and upgrades over the Sport model include 19-inch alloys, matrix LED headlamps, sports suspension, a more aggressive body kit and an S line rear spoiler. Inside, there’s a pair of unique Alcantara-trimmed sports seats, a sports steering wheel and aluminium pedals. 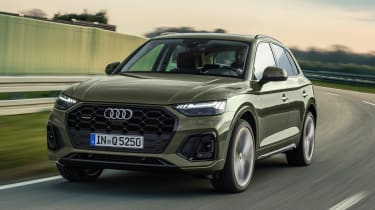 UK Q5 buyers will have their choice of three powertrains. The entry-level Q5 40 TDI is powered by an improved version of the outgoing model’s turbocharged 2.0-litre four-cylinder diesel engine, which now develops 201bhp and 400Nm of torque. It offers a 0–62mph time of 7.6 seconds and a top speed of 138mph.

The 11bhp improvement to the engine’s power output comes courtesy of a new belt-driven integrated starter-generator mild-hybrid system. Audi has also fitted a lighter aluminium crankcase and a lighter crankshaft, shaving 22.5kg of weight off the engine.

Audi’s upgrades have also improved fuel economy and emissions. The old Q5 40 TDI claimed 51.4mpg and 146g/km of CO2 on the WLTP combined cycle – while Audi says this updated model can manage respective figures of 53.2mpg and 139g/km.

Buyers will be offered an improved version of the outgoing car’s turbocharged 2.0-litre 45 TFSI petrol engine, too, which is fitted with the same mild-hybrid technology. Power rises from 242bhp to 261bhp – but torque remains the same at 370Nm. The engine’s top speed and 0–62mph time are also identical at 147mph and 6.4 seconds.

Audi will also launch an updated SQ5 performance model, fitted with a revised version of the old car’s turbocharged 3.0-litre V6 diesel engine. It’s fitted with a more powerful 48-volt mild-hybrid system, which should show an improvement over the outgoing model’s 349bhp output – but Audi is yet to officially confirm the engine’s performance figures.

Finally, buyers will get a tweaked version of the old Q5’s plug-in hybrid powertrain. Like the outgoing model, the system will comprise a turbocharged 2.0-litre four-cylinder petrol engine and an electric motor – and Audi has confirmed that it’ll be offered in a choice of two power outputs. The old car was available with either 295bhp or 362bhp and, like the rest of the Q5 range, we expect a minor improvement over these figures.

What do you make of the facelifted Audi Q5? Let us know in the comments section below…