The Audi A7 Sportback adapts the formula of the original car to make a more resolved and desirable package. Not only is the design more cohesive and appealing, but the car is also lighter and better to drive. The interior also moves the game on in terms of design and technology, with a range of clever autonomous features and slick displays that help to justify the A7’s high-end market position.

The A7’s petrol and diesel engines are strong performers, and thanks to new mild hybrid tech, the official economy figures are impressive. The drive majors on maturity, refinement and composure, although that does mean the A7 isn’t as engaging to drive as a Porsche Panamera. The ride on air suspension is a bit inconsistent, too – you’ll have to test drive the A7 both on springs and air to find your preference. Despite these foibles, there’s no doubting that the A7 is a more appealing prospect than the previous model.

The Audi A7 Sportback lines up for sale alongside the A6 saloon as a premium model with a more practical hatchback body. It has a sporty look courtesy of its wide, long and low dimensions, while a price range starting from around £48,000 emphasises its premium status.

That price puts it at the top end of the premium executive car class, and its most direct rivals come from Audi's German peers, in the shape of the Porsche Panamera, Mercedes CLS and BMW 6 Series GT. At one end of the price spectrum you could save a bit of cash and forego the sporty looks of the A7 by choosing the A6 or any of its saloon car rivals. Meanwhile, buyers at the top end of the A7 price spectrum might even consider a Tesla Model S as an alternative, especially if it's a company car.

Compare the A7 Sportback to the Audi A6 saloon, and the Sportback carries a premium of around £8,000 when looking at like-for-like models. Like the A6, there are Sport and S line trims, followed by Black Edition and the high-spec Vorsprung models. 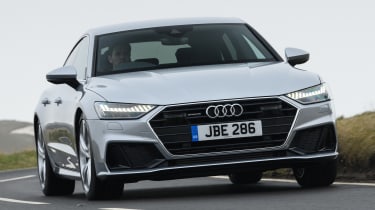 Move to S line, and the wheels are 20-inchers, there's a sportier looking bodykit and sport suspension, Matrix LED headlights with the trick looking sweeping indicators, while the seats are upgraded to part-Alcantara trim.

Black Edition cars include a styling pack in the aforementioned colour, unique 20-inch wheels and a flat-bottomed steering wheel.

The Vorsprung version starts from around £76,000, and the extra outlay pays for kit such as piano black exterior trim, 21-inch diamond-cut alloys, Valcona leather seats, adaptive air suspension and a Bang & Olufsen stereo.

Power for the A7 Sportback comes from 2.0 and 3.0 TFSI petrol and TDI diesel engines that use mild hybrid technology to boost efficiency. Under Audi's engine naming structure, these are badged 45 TFSI (242bhp 4cyl), 55 TFSI (335bhp V6), 40 TDI (201bhp 4cyl) 45 TDI (228bhp V6) and 50 TDI (282bhp V6). All cars are automatic, with twin-clutch S tronic offered on all engines bar the V6 diesels, which use a Tiptronic auto. Quattro four-wheel drive is standard on all cars bar the 40 TDI, which is front-wheel drive with quattro offered as an option.

2019 saw the arrival of the rapid S7 Sportback, with a switch from petrol to diesel power and an electrically powered supercharger to make 344bhp and give it a 0-62mph time of 5.1 seconds. The range-topping RS 7 Sportback uses a 4.0-litre V8 petrol engine, producing 592bhp and 800Nm of torque. The five-door coupe will trouble most supercars in a straight line, reaching 62mph in 3.6 seconds.