Considering it has never built an SUV before, the Maserati Levante is a good first attempt from the Italian luxury car maker. It has all of the upmarket appeal that the company's saloons and sports cars have, while pricing is competitive within the luxury SUV sector to attract buyers.

Its chassis impresses and comfort is reasonable, although it's not quite a class-leader in either regard. Quality issues inside also mean it can’t compete with its German rivals, although it does offer good practicality. However, for some buyers the Maserati badge alone will be enough to tempt them into this stylish Italian machine.

Cars like the Maserati Levante are born of necessity. Makers offer them for sale because people like them, and they price them to sell well, so that they can reap the cash back to build other sportier models. Maserati was late to the SUV market, but the Levante has the interior quality and sporty appeal to make it an attractive model in the sector.

Prices start from around £60,000 and rise to almost £125,000 for the fastest V8-engined GTS and Trofeo models. That means the Levante is priced to compete against cars such as the Porsche Cayenne and Range Rover Sport, while in a middle ground between top-spec versions of the BMW X5, Audi Q7 and Alfa Romeo Stelvio. Other rivals could include hyper-luxury SUVs such as the Bentley Bentayga and Range Rover.

• New Maserati Alfieri coupe and baby SUV to arrive by 2022

While the Levante has a traditional SUV shape, there are different configurations under the skin. The basic car is just called the Levante, then there's the Levante S and Levante Diesel, with the first two being petrol and the third obviously an oil-burner. All cars are four-wheel drive and feature an eight-speed automatic gearbox.

The standard Levante has a 3.0-litre V6 with 345bhp, while the Levante S bumps power up to 424bhp. The diesel model makes do with 271bhp, but still has plenty of torque. As well as these three models, Maserati offers upgrade packs called GranLusso and GranSport. The GranLusso ramps up the luxury features, with plush leather trim and Ermenegildo Zegna silk in the cabin, as well as Radica open-pore wood trim. 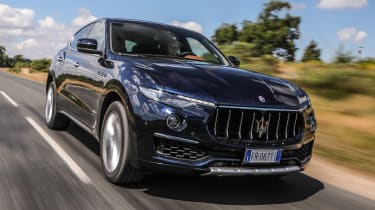 Go for the GranSport model, and the Levante gets a racy makeover, with painted brake calipers 20-inch wheels and a more aggressive bodykit. Inside the cabin there is leather sports seats, along with stainless steel gear shift paddles and sport pedals. Both upgrade packs are priced the same, and add around £8,000 to the Levante's list price.

The most recent additions to the Levante range are the GTS and Trofeo models, both of which are fitted with a Ferrari-derived 3.8-litre V8 petrol engine. This engine produces 523bhp in the GTS and 572bhp in the Trofeo, with the latter achieving the title of the most-powerful series production Maserati ever. Rivals include the Porsche Cayenne Turbo and Audi SQ8. Both get Maserati’s Q4 four-wheel drive system, but with 100% of power going to the rear wheels in normal driving. Sportier styling helps set these models apart from the rest of the range.

In spite of its size, the Levante is only a five-seater, although space in the back is pretty good. Unfortunately, while there's a mix of wonderful details inside, the Maserati is let down by poor quality switchgear buttons. There's a tech-filled touchscreen which was updated for the 2019 model year, but it’s still well behind the systems you’ll find in anything from Audi, BMW or Mercedes.

For some, the idea of a Maserati SUV is sacrilege, but as Porsche has demonstrated, it can be a nice little earner to help bankroll more interesting cars. For others, it’ll be an intriguing alternative to the clinical German norm.