Aston Martin has teamed up with British motorcycle manufacturer, Brough Superior, to produce a limited edition, track only sports bike, and the pair have now released a new teaser video.

The bike, known as AMB 001, will launch at the end of the year, and this new teaser clip shows the first prototype undergoing development.

We’ve already seen the AMB 001’s production bodywork but, in an effort to build a bit of excitement ahead of the bike’s official launch, Aston Martin has wrapped it in the same camouflage worn by DBX SUV development mules. Production will be limited to just 100 units, with each commanding a price of €108,000 (roughly £93,000).

The finished product will be a lightweight sports bike with a double wishbone front fork, a billet aluminium swing-arm, titanium grips, an Inconel exhaust manifold and structural carbon fibre body panels. To keep the motorcycle’s kerb weight down to an absolute minimum, its wheels are also machined from solid aluminium.

Unlike Brough Superior’s current Pendine Sand Racer and Super Sports 100 models – both of which feature a classic naked cafe racer design – the AMB 001 is contemporary. It has full fairings and the pair claim that the bodywork’s S-Curve-shaped aerodynamic wings attached to the front cowl provide functional downforce. 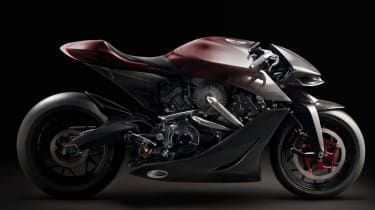 Its hand-stitched saddle and handlebar grips are trimmed in Oxford Tan leather, while the front fairing houses a digital instrument binnacle with read-outs for speed, engine revs and the gear selection. The bike also features the same ultra-light Aston Martin badges found on the Valkyrie, which are hewn from nine-micron-thick stainless steel.

The AMB 001 is powered by a turbocharged 997cc double-overhead cam V-twin engine, which develops 178bhp. The engine is mated to a six-speed sequential transmission and, thanks to the AMB 001’s extensive use of lightweight materials, the bike has a dry weight of 180kg – which gives it a power-to-weight ratio in excess of 900bhp per tonne.

The AMB 001 marks the first time Aston Martin’s badge has appeared on a motorcycle and the first time a Brough Superior product has been fitted with a turbocharged V-Twin engine.

Brough Superior was established in Nottingham in 1919, by George Brough. Throughout the early 20th Century, the brand produced the world’s fastest and most expensive performance motorcycles – such as the 1924 SS100, which was comfortably capable of reaching 100mph and cost the equivalent of £10,000 in today’s money.

What do you make of Aston Martin and Brough Superior’s new motorcycle? Let us know in the comments section below…