Given Bentley has never before ventured into the SUV market, the Bentayga is an impressive first effort. It offers astounding pace whichever engine you go for, surprisingly agile handling and superb refinement. There's also plenty of craftsmanship in the cabin and the ability to endlessly personalise the Bentayga inside and out.

However, we were surprised to discover that the new Bentley doesn't quite have the Range Rover's sense of occasion or kit count. Yes, it's a hugely polished and capable car, but it drives rather too much like a top-spec Audi Q7 and lacks the up-to-date cabin tech of its sibling. And while that's fine in essence, given the Bentayga costs more than twice as much (and the rest if you hit the options list) we expected a bit more. Fortunately, there's plenty of room at the top end of the market for an SUV that gives the rich a chance to demonstrate their wealth.

Bentley has gone bold with its first ever SUV. Claiming unrivalled performance, handling, off-road ability and luxury, the Bentayga promises to raise the bar for upmarket off-roaders. It shares a fair chunk of its underpinnings with the current Audi Q7 SUV, as Audi is one of Bentley’s sister companies in the VW Group.

There are three engines to choose from in the Bentayga. For the purest Bentley experience of all, you can opt for a heavily revised version of the 6.0-litre W12 that we’ve seen in the Continental GT. This engine is a version of the W12 engine VW introduced in the record-breaking Volkswagen Nardo W12 Coupe that averaged 183mph for 24 hours around the Nardo test track in Italy in 2001. Production versions of the W12 have since appeared in the Audi A8, VW Phaeton and VW Touareg, as well as the Continental GT, so you might say that it’s tried and tested. That said, redesigned cylinder block and heads attest to the Bentayga engine’s ‘newness’. 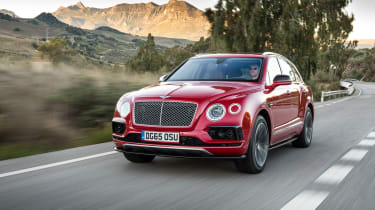 Those looking for a more frugal Bentley can consider the Bentayga Hybrid, a plug-in hybrid that shares its basic powertrain with the Porsche Cayenne E-Hybrid. Power comes from a 3.0-litre V6 petrol engine and electric motor that produce 443bhp; 0-62mph takes 5.5 seconds and top speed is 158mph. The Bentayga Hybrid can travel up to 24 miles on electric power alone – perfect for fuel-free short commutes or school runs.

The Bentley Bentayga launched with a limited run of £230,675 First Edition models, but now the range consists of the Bentayga Hybrid, Bentayga V8 and V8 Design Series, Bentayga (with its W12) and the range-topping, go-faster Bentayga Speed. The big SUV is primarily a four-seater, although you can specify a three-person rear bench, and is largely modeled on the EXP 9 F concept that Bentley revealed at the Frankfurt Motor Show back in 2012.

The Bentayga’s body-in-white is put together at the Volkswagen Group’s SUV factory in Slovakia, which is where its Audi Q7, Porsche Cayenne and VW Touareg sister models are also built. However, while the aforementioned trio roll off the Bratislava Plant production lines complete, the Bentayga bodies are shipped as aluminium skeletons to Bentley’s factory in Crewe for final assembly.

The engines are assembled at Crewe, the bodies completed and the peerlessly-crafted leather and wood interiors are stitched, sawn and polished there too, ensuring the Bentayga can boast genuinely bespoke finishes that are worthy of the famous British marque.