This is the all-new Vauxhall Mokka, a key model for the British company as it aims to take on several fresh rivals in the small SUV market.

Revealed in full after months of teaser images, the Mokka gets a radical new look compared with Vauxhall’s previous baby SUV that carried the Mokka X name. The new model is 125mm shorter than its predecessor, but it has smaller front and rear overhangs, and the wheelbase has actually been extended very slightly – by two millimetres.

That means this new Mokka should feel more compact than the old Mokka X, yet maintain at least the same level of space and practicality. The new car is wider, too, giving it a more aggressive stance.

The overall look of the SUV is quite different from the outgoing Mokka X’s. It’s heavily influenced by the Opel GT X Experimental, a concept that was released back in 2018. It uses much of that car’s front-end treatment, including an ultra-slim LED daytime running light and a more prominent badge in the grille.

The new front-end treatment has its own name, too. Called Vauxhall Vizor, it’s set to be adopted on every new Vauxhall for the rest of this decade. The firm’s design boss, Mark Adams, said: “This is what the Vauxhall design of the future will look like. The new Mokka shows athletic proportions combined with precisely structured, flowing surfaces.”

Its roofline is similar to the concept’s too, and although the production car doesn’t feature the GT X’s rear-hinged back doors, Vauxhall’s designers have used a single chrome detailing line to give the impression of a more rakish look.

The tail is rather more conventional, although a crease leading out from the rear door adds a little bit of muscle on top of the rear wheelarch.

The Mokka is another new Vauxhall based on a platform from the brand’s latest owner, Groupe PSA. Called CMP, the chassis architecture is shared with a host of other products from Peugeot and Citroen, as well as Vauxhall’s own Corsa. CMP’s cleverest trick is that it is able to use a wide variety of powertrains – and that means that the Mokka will be available with a choice of petrol, diesel or pure-electric power.

Indeed, the EV version – called Mokka-e – will be among the first wave of variants to arrive. It’ll be equipped with a 50kWh battery and an electric motor driving the front wheels, with 134bhp and 260Nm of torque. No performance figures have been released, but the claimed range for the model on a single charge is 201 miles; and the car is ready for pretty much all domestic charging standards, as well as DC rapid charging.

Vauxhall hasn’t issued any details of the combustion-engined versions, which should be available by the time first deliveries start at the beginning of 2021. But expect a line-up similar to that of the Peugeot 2008, with 1.2-litre turbo petrols in three states of tune – 99bhp, 128bhp and auto-only 153bhp.

The diesel-engined model, which is almost certain to be the smallest seller in the range, will use PSA’s latest 1.5-litre motor, which produces 99bhp.

The switch to CMP means that there won’t be a plug-in hybrid version of this Mokka, however, because the platform simply isn’t engineered for that technology. But the combustion-engined variants ought to bring notable efficiency gains over the outgoing model, because this new car is up to 120kg lighter.

Inside, the Mokka promises a further step up in the design and quality of Vauxhall’s cabins and dashboards. There are no conventional instruments; instead there’s a digital display of up to 12 inches across, which operates in combination with an extra infotainment screen (seven or 10 inches, depending on the trim level) in the centre that is angled more towards the driver. 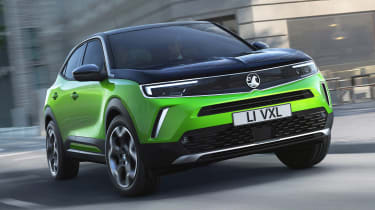 The intended effect of the set-up, called Pure Panel, is for the layout to look like one long display, and it seems a more coherent design here than the arrangement in the latest Corsa. It also helps to cut down on the number of buttons on the fascia.

Current Mokka owners should see a jump in the quality of materials on offer, too. Full leather will be available, along with Alcantara upholstery and a heated driver’s seat with massage function.

The boot capacity is described as ‘up to 350 litres’, just six litres shy of the space offered in the old Mokka X. But this could be an indication that electric versions have a little less flexibility in the position of the boot floor, as is the case in its sister car, the Peugeot e-2008.

The Mokka also gets a fresh range of driver-assistance systems including adaptive cruise control with traffic jam assist, and active lane positioning. All Mokkas will get LED headlights and tail-lights, along with an electric parking brake and traffic-sign recognition technology. Matrix LED headlights, which turn individual LED elements on and off to avoid dazzling oncoming road users, will be optional.

Vauxhall will start taking orders in the autumn, and the first cars should arrive from early 2021. There’s no word yet on pricing but we expect the range to start from around £20,000 for an entry-level 1.2 petrol, rising to roughly £28,000 for the Mokka-e.

Vauxhall believes the pure-electric Mokka-e will cater for most charging needs. It has support for up to three-phase 11kW charging in AC mode for charging at home, while 100kW DC capability should be standard, allowing the car to be topped up quickly at public charge points to more than half of its 201-mile capacity in less than half an hour.

Support for the even faster standards being rolled out at networks such as Ionity is unlikely at this price point – but then, with a relatively modest battery size of 50kWh, it’s debatable whether the Mokka-e needs it anyway.

The latest generation of Captur represents a major jump forward for Renault’s baby SUV, with much-improved quality and finish inside, more efficient powertrains and an altogether more grown-up experience.

The Captur can’t match the Mokka’s all-electric credentials, but there is a plug-in hybrid version called E-Tech. It takes a hit on boot space but it can travel up to 30 miles on electricity alone – while still offering the long-distance flexibility that comes with a petrol engine.

Chinese-owned MG used technology from its parent company to come up with one of the early pure-electric small SUVs – and the ZS EV is one of the more keenly priced offerings in the market.

The range is a modest 163 miles, but that would be enough for many urban users – and the ZS has decent space inside for passengers and luggage. The drive is uninvolving, and some of the cabin quality iffy – but at this price, the MG deserves to be on many shortlists.

The pure-electric Mokka’s toughest rival may well be its close relative, the Peugeot 2008. Its sits on the same CMP platform, and as a result its technical make-up looks remarkably similar to the Vauxhall’s.

You can have the 2008 with a choice of petrol, diesel and electric power – and should you choose the last of those options, you’ll have around 200 miles of range. The key difference could be pricing – and Vauxhall’s willingness to push the Mokka harder on finance deals.

What do you think of the new Vauxhall Mokka? Let us know your thoughts in the comments section…