The road to fully self-driving cars looks to have sped up significantly thanks to the use of deepfake software, a technology that can generate thousands of photo-realistic images in minutes.

The use of deepfake tech means self-driving systems can be ‘taught’ to recognise countless driving environments, allowing developers to simulate different weather conditions, times of day, buildings, and other variables, such as altered road markings. These simulations are photorealistic, despite being confined to the virtual world, and can recreate road environments from anywhere in the world.

Exposing autonomous car systems to a variety of driving environments is vital, as any truly self driving car that may arrive in the future must be able to deal with the infinitely variable road environments that exist from hour to hour around the globe. By bringing these situations out of the real world and into the virtual one, developers are able to significantly speed up how quickly self-driving vehicles will arrive.

The breakthrough comes from Oxford-based firm Oxbotica, which says the deepfake tech can produce “thousands of accurately-labelled, true-to-life experiences and rehearsals”, with a level of detail that recreates individual raindrops on windscreens. 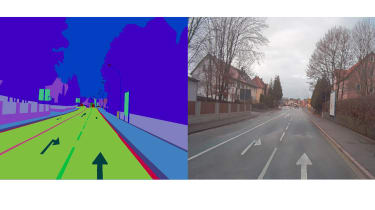 Paul Newman, co-founder and chief technology officer at Oxbotica, said deepfakes present “an incredible opportunity for us to increase the speed and efficiency” of self-driving car development, adding that the software: “enables us to test countless scenarios, which will not only enable us to scale our real-world testing exponentially; it’ll also be safer.”

Oxbotica says that while there will never be a substitute for real-world testing, deepfakes mean a far greater number of scenarios can be used than if on-road testing were the only source of machine learning.

The company is using two different pieces of software in its deepfake trials, with one creating the fake images, and another detecting which images are real, and which are reproductions. Once the detection software is unable to tell the difference between a real scenario and a rendered one, the creation software is then judged ready to generate scenarios to ‘teach’ self-driving car systems.

Deepfakes (the word is a blend of ‘deep learning’ and ‘fake’) came to prominence in viral and other online videos, with the sophisticated software allowing people’s faces to be digitally imposed on the bodies of others, with a high degree of realism. While there have been significant concerns that deepfakes allow, for example, foreign states to create fake videos of politicians in compromising or controversial situations, the technology is now clearly being put to a more positive use.

Do you like the idea of cars driving themselves? Let us know in the comments…