The X7 is BMW’s flagship – large, luxurious and filled with the latest technology. A range of powerful engines are offered and while it’s not the cheapest to run, the X7 drives far better than you’d expect for a car of its considerable size and weight. A Volvo XC90 will be cheaper to own and the Land Rover Discovery is a better all-rounder, but it’s hard to ignore the BMW’s great blend of quality, luxury, high-tech equipment and good driving experience.

The X7 is BMW’s biggest, most luxurious SUV, designed to suit trends in the lucrative US and Chinese markets. There’s no escaping the X7’s five-metre-plus length and bluff front end; it’s one of the biggest and most imposing cars on sale in the UK today. It’s noticeably larger than most of its rivals, namely the Land Rover Discovery, Volvo XC90 and Audi Q7 – but the result is a car with ample space for seven adults to travel in comfort.

The X7 is built on BMW’s CLAR platform as found underpinning the X5, 5 Series and 7 Series. Much like the latter saloon, the X7 is aimed at the upper end of the market and so is packed with technology and high-end materials; adaptive air suspension is standard along with extended leather upholstery, sophisticated infotainment with connected services and a host of automatic driver assistance systems.

• The best SUVs to buy now

The range is simple: a standard X7 is joined by M Sport and sportier M50i and M50d models. The entry-level car is powered by a choice of 3.0-litre engines – a 261bhp 3.0-litre straight-six diesel and a 335bhp 3.0-litre straight-six petrol, badged xDrive30d and xDrive40i respectively. The M50i is powered by a 523bhp V8, while the marginally more sensible M50d gets a quad-turbo straight-six diesel with 395bhp. Performance is strong but economy is not fantastic – even the most efficient model returns less than 35mpg on average. 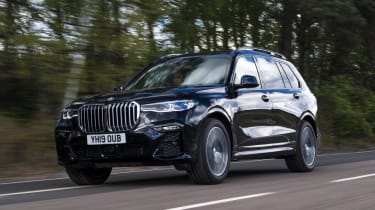 All come as standard with BMW’s tried-and-tested eight-speed gearbox and xDrive four-wheel drive system. The standard height-adjustable air suspension can be raised to tackle rough roads or lowered for ease of access; it’s not as capable off-road as a Discovery but shouldn’t struggle with farm tracks or grass car parks. The optional xOffroad pack prepares the X7 for more treacherous conditions, including rough-terrain driving modes, a locking differential and a sump guard.

The X7’s bold styling is further exaggerated in M Sport trim, which adds unique 21-inch wheels and a range of exterior and interior styling changes – along with more powerful brakes and a sportier steering wheel. The step up to either M50 model adds 22-inch wheels and Cerium Grey trim pieces, while inside there’s a host of high-end additions, including an uprated Harman/Kardon sound system.