The BMW 8 Series is an interesting mix of swoopy, eye-catching style, unabashed luxury and sporting promise. It’s a package that fits somewhere between the extreme refinement of the Mercedes S-Class Coupe and the sporty driving thrills of the AMG GT. It’s not quite as refined as the former, or as sharp as the latter, but as an all-rounder, it’s an impressive machine.

There’s been some criticism of the styling, which looks fussy from some angles, but there’s no doubt the interior is beautifully finished and impressively specced, with the latest version of BMW’s iDrive infotainment system. There’s a 4×4 drivetrain with a punchy diesel and a devastatingly quick V8 petrol in the M850i, while a big boot makes this a genuinely practical grand tourer, if you accept that the confined rear seats are only for occasional use.

The BMW 8 Series is offered as a two-door coupe, a four-door Gran Coupe version with an extended wheelbase and a convertible that sits at the top of the company’s line-up, but features none of the environmentally-conscious hybrid tech of the BMW i8. Instead, the replacement for the 6 Series relies on the old-school muscle car approach, with beefy petrol and diesel engines offering extravagant amounts of power and torque.

There are three available versions of each body style: the 840i sDrive with 335bhp, the 316bhp 3.0-litre diesel 840d xDrive and the M850i xDrive, with a 4.4-litre twin-turbo engine offering well in excess of 500bhp. For those wanting to crank up the performance there's the 616bhp M Competition models, again offered in coupe, Grand Coupe or convertible form.

While the BMW 8 Series offers a distinct blend of comfort and sportiness that sets it apart, it enters a market that’s not short of rivals when it comes to expensive GT models. With list prices starting from around £71,000 to well over £100,000, the roster of potential competitors includes sportier machines like the Porsche 911, along with more relaxed offerings like the Lexus LC and Mercedes S-Class Coupe, which fall somewhere in between. The 8 Series Convertible takes on the soft-top versions of those cars. 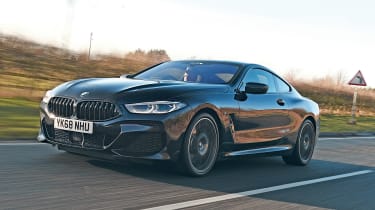 The Gran Coupe goes head-to-head with the Audi A7 Sportback and Mercedes CLS. All 8 Series get an eight-speed automatic gearbox and all bar the 840i feature xDrive four-wheel drive.

Inside BMW’s own range there’s not much that comes close, although as you’d expect the latest BMW 7 Series saloon is the source of much of the 8 Series’ technology. Buyers looking for ultimate luxury might consider the larger BMW X7 SUV, while those wanting sporty thrills will arguably be better satisfied behind the wheel of a BMW M4 or M5.

This isn’t the first time BMW has rolled out the 8 Series badge of course, and many enthusiasts will have fond memories of the late 1990s variant. That too was a big, excitingly styled coupe offering impressive performance without being excessively sporty, and it’s perhaps surprising that BMW has taken so long to produce a follow-up.