One in six UK car industry jobs at risk

One in six workers in the UK car industry is at risk of redundancy unless a coronavirus support package is put in place by Government, automotive bosses have warned.

The call to arms follows a member survey of the Society of Motor Manufacturers and Traders (SMMT), the body that represents over 800 automotive firms in the UK. The trade organisation says the covid pandemic has already cost the industry £33.5 billion, and vehicle production isn’t expected to reach pre-pandemic levels until 2025.

With 6,000 jobs lost since the start of the crisis, and Brexit uncertainties already playing havoc with one of the most internationally integrated industries in the world, the SMMT is asking Government to consider providing “unfettered access to emergency funding”, as well as reduced VAT and business rates, and incentive schemes to stimulate consumer demand.

Car dealers in England reopened at the start of June, while those in Wales have just been allowed to start trading and Scottish showrooms are due to be back in business by the end of the month. Many UK car manufacturing plants, meanwhile, restarted production in May, although some will remain closed until September.

The SMMT says that social distancing measures in plants and reduced consumer demand in dealerships are slowing recovery, though, and has suggested “permanent short-time working” as a possible solution to reduced production and demand. Short-time working would potentially avoid redundancies by reducing hours and salaries. This would require a national industry agreement, though, as the practice is only allowed under specific circumstances, or if stipulated in contracts. 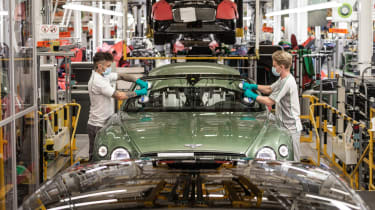 While recognising the “unprecedented” Government support that has been provided so far, Mike Hawes, chief executive of the SMMT said: “A third of our workforce remains furloughed, and we want those staff coming back to work, not into redundancy.” The end of the furlough scheme in November will represent a “lifeline” being cut off, the trade body has wanted.

Speaking at the SMMT’s annual summit, Hawes said that while the industry remained fundamentally strong: “the prolonged shutdown has squeezed liquidity and the pressures are becoming more acute as expenditure resumes before invoices are paid.”

Further existential threats are posed by the lack of progress in Brexit negotiations, with no-deal projected to cost the industry £40 billion in lost revenue. Even with a tariff-free free-trade agreement, the SMMT warns it will take five years for car and van production to reach pre-crisis levels of 1.35 million cars a year. This will fall to a projected 850,000 units in the event of no deal, however, a level not seen since 1953.

“Covid has consumed every inch of capability and capacity and the industry has not the resource, the time nor the clarity to prepare for a further shock of a hard Brexit”, Hawes said. “That’s why we do need to ‘turbo charge’ the negotiations to secure a comprehensive Free Trade Agreement with the EU that maintains tariff and quota free trade… With such a deal, a strong recovery is possible, we can safeguard the industry and our reputation as an attractive destination for foreign investment and a major trade player.”

Should the government give more help to the car industry? Have your say in the comments…