Vauxhall has issued a teaser clip of the second-generation Mokka SUV which will be revealed tomorrow on 24 June, before going on sale in early 2021, where it will offer fresh competition for the likes of the Ford Puma, Nissan Juke and Renault Captur.

The new teaser video fleetingly details the next-generation Mokka’s silhouette and L-shaped tail lights. The clip also teased the crossover’s headlamps and grille, both of which are integrated into a single panel that stretches across the front of the car.

Vauxhall calls this front bumper design the “Vauxhall Vizor,” due to its similarity to the screen on a full-face helmet – and the company has confirmed that all of its next-generation models will use the same styling language.

Vauxhall also recently released some images of a camouflaged Mokka development mule, giving us a reasonable indication of the rest of the crossover’s styling.

The prototype demonstrates that Vauxhall/Opel’s design team – which is still led by Briton Mark Adams – will keep the car lower and wider than the first-generation Mokka, and take several key styling cues from the well received GT X Experimental concept, which was first revealed in autumn 2018.

In particular, the GT X’s wider, flatter front bumper looks set to be adopted, and Vauxhall/Opel’s designers have tried to retain as much of the concept’s raked roofline as possible. However, the detailing around the prototype’s C-pillar shows that they’re also trying to keep some headroom for rear-seat passengers. 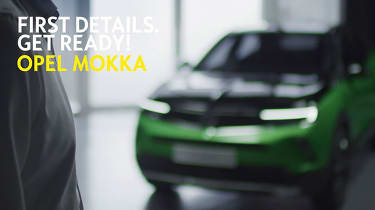 Vauxhall teased the Mokka’s interior alongside the car’s radiator grille and, while the image is a little abstract, it suggests the crossover will receive a minimalist dashboard with a central infotainment system. Buyers should also be offered a digital instrument binnacle on more lavishly equipped models.