Volkswagen has released a short video clip teasing the facelifted Arteon saloon and a new Arteon Shooting Brake ahead of their official launch on 24 June. The updated model line-up will also feature an revised engine range and some technology updates.

Like most teaser videos, Volkswagen’s Arteon clip highlights a few close-up design features, such as the car’s updated headlights, revised tail lights and new alloy wheels. The video also offers our first look at the facelifted Arteon’s interior, which looks set to receive a new ambient lighting system for the dashboard and door panels.

Both of the cars in the teaser video also wear R badges, suggesting Volkswagen will add a new range-topping, performance-focussed model to the Arteon’s line-up. If the Arteon R follows the same formula as the Golf R, it should feature uprated suspension, bigger brakes, four-wheel drive and a turbocharged 2.0-litre petrol with upwards of 300bhp.

Volkswagen also recently issued a pair of design sketches, which offered a better indication of the facelifted Arteon’s styling. The saloon in the sketch features an updated front bumper with new air intakes and a revised radiator grille with a full-width LED daytime running light, while the shooting brake will incorporate a rakish estate rear end.

Our spy photographers recently spotted a scantily camouflaged version of the forthcoming Arteon estate undergoing winter testing – and, like those development mules, everything from the car’s B-pillar rearwards looks to be new. 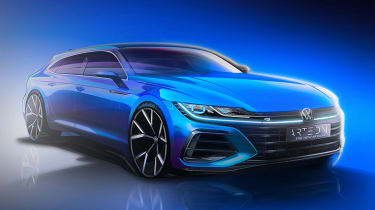 Inside, Volkswagen says the revised Arteon will be given an all-new cabin layout, which uses the firm’s latest MIB3 infotainment system. Details are yet to be confirmed, but we expect the new interior technology will comprise a 11.7-inch digital instrument binnacle and a 9.2-inch infotainment system – as found in the recently updated Volkswagen Passat.

Volkswagen has also confirmed the Arteon will be available with a new “Travel Assist” semi- autonomous driving mode, which the company says has been designed with long-distance journeys in mind. Under the driver’s supervision, the system can assume control of the vehicle’s steering, acceleration and braking on the motorway at speeds up to 130mph.

Back in 2017, Volkswagen executives hinted that the new Arteon estate could usher in a larger, more powerful six-cylinder engine. However, given Volkswagen’s recent push towards eco-friendly vehicles, it now looks more likely that the company’s flagship estate will feature the same 215bhp plug-in hybrid powertrain as the new Skoda Superb iV instead.

What do you make of the new Volkswagen Arteon Shooting Brake? Let us know in the comments section below…