Big, luxurious convertible grand tourers aren’t all that common and therefore aren’t released that often, but two have arrived in the UK just in time for summer. They are the BMW M8 Competition Convertible and the Bentley Continental GT V8 Convertible. Both blend image and performance with an eight-cylinder soundtrack, and both are pricey, as we’ll see.

However, this pairing also exhibits a change in this sector of the market, because in this class there’s an increasing focus on dynamics and performance rather than the traditional stance that erred towards pure comfort and opulence.

Any good luxury drop-top still has to possess these qualities in spades, though, so we’ll see which is the best option here.

The BMW isn’t as expensive as the Bentley, but do the Continental’s image and quality make up for its higher price? It’s just one of the things we’ll find out in this summer sizzler of a test.

Bentley is part of the VW Group, and the Continental GT is based on the Group’s MSB platform, which includes some engineering input from Porsche. The Continental GT was designed from the outset with this Convertible in mind, but while it uses many components from other high-end cars within the Group, it carves out its own personality, whereas the M8 feels less distinct.

The Continental GT’s 4.0-litre twin-turbo V8 is shared with some Porsche and Audi models, and even a Lamborghini, and makes 542bhp and 770Nm of torque here. Its exhaust note is more interesting than the larger W12 model’s, and there’s so little difference in performance that, on the road, most owners won’t feel short-changed.

The Bentley is slower than the BMW, though. With a time of 4.0 seconds for the 0-60mph sprint, it can’t get close to the M8’s 3.3-second 0-62mph time. But there’s more than enough in-gear grunt for any convertible owner’s needs here.

There’s very little turbo lag, and the Continental romps forward on a rich wave of subdued V8 noise. It doesn’t quite have the immediacy of response of the M8’s engine, but the whole powertrain is smoother and suits the character of the car more; the gearbox in particular is super-slick, shifting imperceptibly, even when under manual control.

However, the Bentley puts clear distance between itself and the BMW when it comes to ride comfort. The Continental GT is serene and sails over bumps with barely any hint of corruption to the chassis. Only bad potholes and scars will cause it to shake, where the M8 thumps more over patchy tarmac. The GT really is incredibly comfortable and refined, with less noise coming through to the cabin.

However, in Sport mode the body control is noticeably tauter – there’s a bigger difference between the softest and firmest settings when compared with the M8’s modes – and the steering is beefier. Despite its extra weight over the BMW, the Bentley does a good job and responds sweetly, offering plenty of grip for such a big, comfortable machine. It’s genuinely enjoyable to drive quickly, but the same can’t always be said in the stiffer M8. 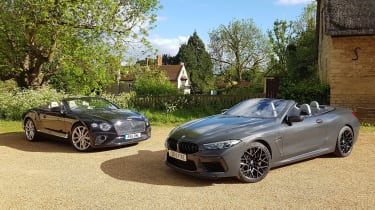 There’s a big price gap, but the Bentley shows where that money goes. The interior is much classier, with higher-quality materials and a superb level of craftsmanship. You get a lot of kit too, as you’d expect given the price. A 12.3-inch touchscreen infotainment system, a matching digital dash, phone connectivity, matrix LED lights and 20-inch alloy wheels all feature. There are also plenty of pricey option packs for more kit, too.

The M8 Competition Convertible is a technical tour de force. Let’s start with the powertrain, because it’s what defines this hottest M car. The 4.4-litre twin-turbo V8 produces 616bhp; that’s 74bhp more than the Bentley, but the M8 has 20Nm less torque, at 750Nm in total.

It sends this motive force to all four wheels through an eight-speed automatic gearbox, although as with the M5 saloon, which shares the same running gear, you can uncouple the front axle to access its rear-drive balance.

The M8 is startlingly quick for such a big, heavy machine. With launch control, 0-62mph comes up in just 3.3 seconds; that’s 0.7 seconds quicker than the Bentley takes to get to 60mph. There’s plenty of flexibility, and the turbocharged torque that’s accessible from just 1,800rpm means it’s easy to drive quickly.

However, when you do, you’ll realise that the additional engineering used to turn the already weighty 8 Series Coupé into this open-topped flagship has made it heavier still. The Carbon Core helps mitigate this, and its 2,085kg total is still some way shy of the Bentley’s 2,335kg kerbweight, but it certainly blunts the focus that the car is designed to deliver.

The steering is quick, but it doesn’t feel as weighty as the Bentley’s, while even in the softest suspension setting the BMW is firmer and less comfortable. Its 20-inch alloys bump and bounce around more aggressively than the Bentley’s – you really feel this – while the body is more tautly controlled in Comfort, but it’s still on the jiggly side. It’s not overstating the truth that the Continental is a lot more comfortable, yet the Bentley gets close enough to the BMW’s agility in Sport mode, too.

While the M8’s turn of speed in a straight line is nothing short of devastating, the powertrain is soulless. The V8 has a bassy bark, but nowhere near the presence of the burbling Bentley. The eight-speed automatic gearbox is great when you’re cruising around too, but increase the shift speed to the third and final setting, and it starts to jerk on changes.

So there are holes in the M8’s armour dynamically, and it’s a similar story inside. You get all the kit you could want: an infotainment system controlled by the touchscreen or a rotary dial, a sports exhaust, adaptive suspension, heaters that blow hot air onto your neck, a head-up display, parking assistant with a rear-view camera and much more. But the dashboard features controls and switches that can be found in lower-spec BMWs – not something that you would expect in a six-figure sports car.

The Bentley justifies its higher price with greater quality and comfort, while its superb style and image are backed up by substance. The V8 is powerful enough and has more character than the BMW’s, plus the car is an involving drive, yet supremely refined. It’s the best luxury convertible on sale.

The M8 is a good car, but it feels at odds with itself. It’s not as luxurious as the Bentley, yet it’s only slightly more engaging. The powertrain lacks character – important in a convertible – and it’s not that comfortable. However, it is rapid, so if you need to tick that box, the BMW is the one to go for.