Despite the arrival of digital torque wrenches, they’ve yet to dominate the market in the same way as other hi-tech kit, so our test focuses on conventional tools.

And you can see why they’re popular when you use them; there’s no need to watch for lights because there’s a solid clunk when the desired torque setting is reached.

So whether you’re simply changing a wheel or carrying out more complex suspension or engine work on your car, here’s our pick of the tools that will make sure tightened nuts and bolts stay that way.

Using Cromwell Tools’ calibration lab, we tested each tool to the ISO 6789:2003 standard, to see how well they performed at low, medium and high settings. Against ultimate accuracy, we pitted price – from online sources  – ratchet finesse, whether the tool could torque in both directions, and ease of setting. Imperial and metric scales were a bonus – preferably with the common Newton metre (Nm) and pound-force foot (Lbf.ft) scales.

Halfords’ 200139 is definitely a cut above its rivals in usability and precision, followed by the dearer but just not quite so accomplished TTriTorq TRQ-557-6900K. Sealey’s AK624 is the best of the budget offerings.

The Halfords 200139 has real pedigree. It’s made in the UK by one of the world’s leading manufacturers of torque wrenches. So it’s no surprise that it performed brilliantly, proving dependably accurate across its range, especially down at the lower settings. The maker’s expertise also shows in the tool’s functionality. Two separate windows cater for the Nm and Lbf.ft scales, making the wrench a doddle to set in both units. And in use, the wrench’s fine 48-position ratchet comes into its own. A final bonus is that torque measurement is possible in clockwise and anti-clockwise directions.

A halfway house between the not-so-great budget entries here and Halfords’ Best Buy. Critically, the TriTorq took the ISO 6789 testing in its stride and passed with flying colours. And in use, there’s little to choose between the two top scorers. Both have separate windows for the Nm and Lbf.ft scales, both can be set high without the adjuster becoming ridiculously stiff, and both have finer-than-average ratchets. But this is dearer than our Best Buy despite only being able to torque in a clockwise direction, and it has a 36-position ratchet, rather than 48 positions. 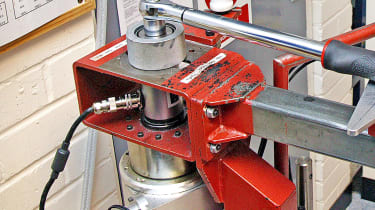 This is the wrench to choose if you want change from £30. But it struggles to get close to our winner as it failed the accuracy testing. Very precise results in the middle and high ranges were spoiled by initially poor readings lower down. These got better during testing, and the tool may have passed had the process been immediately repeated. The 24-position ratchet is a little coarse compared with the other award winners and odd decimal graduations in the Nm scale make metric torques difficult to set, but the Lbf.ft scale is more sensibly graduated.

What, no ratchet? No, you use the Kennedy to administer a measured tightening nip – and rely on ratchets or spanners to take the nut or bolt up to the ‘almost done’ stage. Given that torque wrench ratchets fail far more frequently than the torque measuring components, this idea isn’t without its merits. In all other ways, there’s a lot to like about this product. It can measure torque in both directions, its four scales are clearly laid out (Lbf.ft, Lbf.in, Nm, Kgm), adjusting the tool to high torques is a doddle and overall accuracy is excellent.

Avoid this best seller if you’re into British classics, as the lack of an Imperial scale is a major bind. Instead, the tool has the slightly leftfield Kgm scale and the more mainstream Nm, but both are oddly graduated. The Nm markings work well enough, but the Kgm figures have bizarre decimals – try estimating where 10 is when the marks below and above are 8.6 and 14.3! On the test rig, the impressive mid and high-range accuracy was marred by poor results at the lower end.

A snazzy-looking piece of kit, its white figures set against a black background are far easier to see than the usual digits etched into shiny chrome. Set it to Nm and the scale is straightforward, easy to see, and the adjuster is smooth to turn. The imperial Lbf.ft scale is more challenging, with crazy decimal graduations to contend with. However, its patchy precision was easily the product’s biggest drawback. It was all right at high settings, but was varied in our medium and low settings tests.

An absolute bargain at first glance, undercutting the Draper and Clarke models by almost a third. Silverline even throws in a 1/2-inch adapter and a medium extension bar. But the tool produced unusual results in our calibration tests. Wrenches are normally out at the low or high end, indicating the calibration has slipped. Here, decent mid-range performance contrasted heavily with poor results at lower and higher settings. Avoid this tool if you want an Imperial scale, too.

Another wrench from the Silverline 633567 and Clarke CHT141 school of thought. And the similarities run more than skin deep. Both reject an Imperial scale in favour of Nm and Kgm. And again, one scale is easy to use, while the other is a mess of odd decimal graduations. Fortunately, it’s the Kgm scale that suffers. Assuming you can make sense of the numbers, you’ll require serious grip to spin the adjuster to high settings. Accuracy was also hit and miss. It was okay at the bottom end, but way out at the top.