This is the all-new Citroen C4. Revealed ahead of its official debut at the end of June, the model is the first from Citroen to be offered with the choice of a diesel or petrol powertrain as well as a fully electric option, which will be badged e-C4.

With the regular hatchback market suffering in the wake of the SUV boom, Citroen has taken a different approach with its new C4. As revealed by Auto Express last month, the VW Golf and Ford Focus rival has morphed into a crossover.

Speaking to Auto Express, Citroen’s CEO Vincent Cobée told us how the segment needed reinventing. “I would agree that the C-segment has been a fairly traditional sector and is probably right for changes,” Cobée explained. “One [idea] is to find the proper balance between affordability, versatility and comfort, better access, and better visibility, as there’s probably also a need for more spice in the style.”

The new C4 borrows styling cues from the larger C5 Aircross SUV as well as the 19_19 concept that was revealed as a preview of the future of Citroen design. Its influence can be seen in the head and tail-light design of the new C4. The images also reveal both petrol and electric versions of the C4, and clearly show that whichever powertrain buyers choose, the look of the crossover will be identical, with the exception of blue detailing on the badges of the e-C4.

The cabin is a more gentle redesign of what we can see in today’s C4 Cactus. A new digital dashboard and instrument binnacle are obvious, while a redesigned centre console also appears. 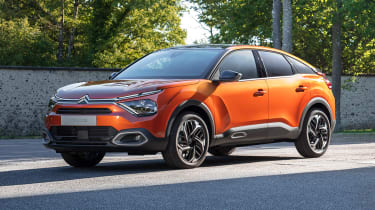 Citroen is keeping full technical details of the new C4 under wraps until its official debut on 30 June. However, the car is based on the same e-CMP underpinnings as the latest Peugeot 208 and 2008, so we already have a good idea of what to expect.

There’s likely to only be one petrol engine on offer, a 1.2-litre three-cylinder, but in three states of tune: 99, 128 or 153bhp. All models will be front-wheel drive, while the more powerful versions will be offered with an eight-speed automatic gearbox. The only diesel option will be a 101bhp 1.5 litre.

The e-C4 is expected to make use of a 50kWh battery that will power an electric motor, developing around 135bhp, on the front axle. The same powertrain in the Peugeot e-2008 enables a range of around 190 miles on the WLTP cycle, and a similar figure is expected in the e-C4.

One thing Citroen has confirmed is that all C4s will have the firm’s new progressive hydraulic suspension set-up. The car’s springs and shock absorbers work with hydraulic compression and rebound stops, which are designed to gradually slow body movement over bumps and potholes.

Sales of the new C4 will begin in January, with prices likely to start from around £19,000. The e-C4 should come in at less than £30,000 once the Government’s plug-in car grant has been taken into account.