Our spy photographers have spotted a facelifted Skoda Karoq undergoing testing in the Czech Republic, confirming that an update for the brand’s Nissan Qashqai rival is coming later in the year.

Cosmetic revisions for the Karoq follow the usual mid-cycle update trend. At the front, Skoda has fitted reshaped LED headlamps, a new front bumper and a slightly tweaked radiator grille, while at the rear there’s a reprofiled undertray and a subtly reworked tailgate spoiler. Buyer should also be offered some fresh paint finishes and a couple of extra alloy wheel designs. 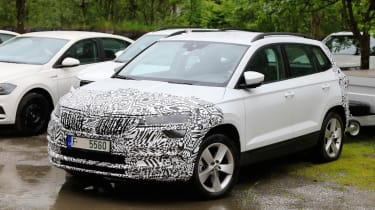 There’s the potential for Skoda to introduce an iV-badged plug-in hybrid version of the Karoq with this update. It would likely use the same 1.4-litre four-cylinder petrol engine and electric motor combination from the new Skoda Octavia iV, which would provide an output of 201bhp and a maximum electric range of around 30 miles.

The rest of the Karoq’s line-up will be made up of the Volkswagen Group’s familiar blend of petrol and diesel engines, opening with a 113bhp 1.0-litre three-cylinder petrol and topping out with a 187bhp 2.0-litre four-cylinder petrol on the flagship Sportline model. In the middle of the range, there’ll be a choice of 2.0-litre diesels, along with a 148bhp 1.5-litre petrol.

What do you make of the facelifted Skoda Karoq? Let us know in the comments section below…