From behind the wheel, the Renault Zoe feels much like a traditional combustion-engined supermini – albeit a much quieter one. The Zoe can easily cover 150 miles before you need to think about recharging, too, although this only applies when conditions are favourable, as the range drops in cold weather especially.

Still, there’s a lot to like about this all-electric Renault. It would especially appeal to families with two or three cars, as the Zoe suits shorter commutes and daily errands perfectly. It's more practical than a Volkswagen e-up! and cheaper to buy or lease than a BMW i3. Not to mention the fact it'll cost you mere pennies to run.

2017 saw the Q90 fast charge option added, but unless you regularly rely on public charge points, we'd recommend the standard R110 setup – bizarrely it's faster to recharge than the Q90 system when using a standard power supply.

With an ever-improving battery range and a competitive price, the Renault Zoe is an electric car that makes more sense than most. Constant updates mean it has benefitted from Renault's latest electric developments, and the current model for sale in dealers is well worth considering if it can fit into your lifestyle.

There are two things that you need to consider before putting a Renault Zoe on your buying shortlist. First, how far do you drive on a daily basis? This is the crucial factor when buying an electric car, and the main reason why many people think an electric car isn't for them. However, the Zoe has an electric driving range of up to 186 miles (conditions permitting), and if you only need a car to run around town on short trips, then that will be more than enough to cover most journeys.

The second factor between you and buying an electric car is the ability to charge it. With the UK's public charging infrastructure still only offering a patchy service at best, your best bet is to charge it at home. If you live in a flat or terrace without any off-street parking, then the ability to recharge the Zoe will be difficult, but if you have a drive or garage, then you'll soon get into the habit of plugging the car in overnight to charge it, just like you would with a smartphone or other electronic device.

If you can accommodate these requirements, then you can consider the Zoe as the electric supermini alternative to petrol-powered models such as the VW Polo, Citroen C3 and even the Renault Clio. That's because there are few electric car rivals to the Zoe at its price point: the compact BMW i3 is a lot more expensive, while the Nissan Leaf and VW e-Golf are from the class above. All of these models have bigger batteries, longer ranges and more tech on board, but they're also a lot more expensive.

The Zoe is supermini-sized, and it has a few design flourishes to help it stand out from the crowd. The smooth bodywork marks it out from the Clio, while metallic blue details in the lights and badges are a signifier of Renault's electric models. 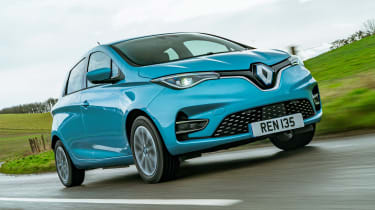 Inside there's a stylish interior with lots of smooth surfaces, while the switchgear and infotainment touchscreen are borrowed from the Clio.

Under the skin, power comes from a 108bhp R110 electric motor which was introduced in 2018 to replace the original R90 motor. If you know you will be quick-charging the Zoe regularly, then Renault also offers the Q90 electric motor, which is better suited to fast charging, for an extra £750.

The Zoe's battery pack sits under the seats where a fuel tank sits in a petrol-engined car, and the 2018 update saw battery capacity increased but without making the pack itself any physically larger. The lithium-ion pack is charged via a socket in the nose, and this can take anything up to eight hours, depending on your power source.

There are two trim levels to choose from – Dynamique Nav and Signature Nav – and Renault offers two purchase options. The standard Zoe starts from around £28,500 (or £25,000 when you add the Government's £3,500 Plug-in Car Grant), but that's only if you buy the car outright. These are the 'i' versions, and Renault offers you the option to buy the car and rent the batteries along with it.

This drops prices by almost £7,000, so they start from a supermini-like £18,500 including the Grant, but you have to factor in monthly battery hire into the price, which starts from around £60 a month. Another incentive to buy is the fact that Renault includes a free wallbox installation to help you charge up your Zoe.

This car scored 3.7 on our sister site DrivingElectric