The Hyundai Kona is a car that clearly uses its design to draw in buyers. It's not that rewarding to drive, thanks to lifeless steering and a 1.0-litre engine that isn't as flexible as the small units in some of its rivals. The ride is unsettled on the larger wheels that come on many versions, and there's not as much passenger or luggage space on board as you'll find in some competitors.

The all-electric Kona EV sets high standards in the class with its long range and decent price tag, but the standard version is in the middle of the pack if you're after an alternative to a Nissan Juke or Renault Captur.

With the launch of the Hyundai Kona, the Korean maker combined its talents for building rugged SUVs and small cars into one. But it also added electric and hybrid power to the mix alongside the usual combustion-powered options. In terms of price, the Kona ranges from around £18,000 for the entry-level 1.0-litre petrol model, to over £41,000 for the Premium SE all-electric version with a 64kWh battery.

The standard Kona is pitched against a swathe of small crossover rivals, ranging from established models such as the Nissan Juke, Renault Captur and Peugeot 2008, as well as more recent arrivals like the Citroen C3 Aircross, SEAT Arona and Vauxhall Crossland X, not to mention the Stonic from sister brand Kia.

While the Kona and Stonic both arrived on the market at around the same time, they're actually very different. The Kia uses running gear from the Rio supermini, while the Kona uses an all-new platform, which is why it can be offered with electric drive.

Power for the standard Kona comes from 1.0 and 1.6 T-GDi turbo petrol engines. The 1.0 petrol three-cylinder gets a six-speed manual gearbox as standard, while a seven-speed DCT auto is standard with the 1.6 petrol – this model is also the only version with four-wheel drive.

After dropping the diesel variant in 2018, the space as the Kona’s most fuel-efficient option – aside from the fully electric model – was filled by the Hybrid, which joined the range a year later. This shares its 1.6 petrol/electric powertrain with the Hyundai Ioniq and the Kia Niro. 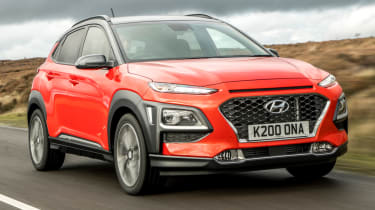 On the Kona EV front there's now a choice of the standard version with a 39 KWh battery, producing 134bhp, or a more powerful 201bhp model with a larger 64 KWh battery.

There are S, SE, Play, Premium, Premium SE and Premium GT trims on offer. S trim gets air conditioning, front and rear electric windows, electrically adjustable side mirrors, auto headlights and LED daytime running lights. DAB and Bluetooth are included too, albeit as part of a monochrome LCD infotainment system.

There aren't many options offered: instead Hyundai makes you move up a trim level to get more kit. SE adds an upgraded seven-inch touchscreen infotainment system with Android Auto and Apple CarPlay. There's also electric adjustment on the driver’s seat, rear parking sensors and a rear-view camera, plus 17-inch alloy wheels, cruise control, fog lights and leather on the steering wheel and gear lever.

Premium adds climate control, keyless entry and ignition, auto wipers and increases the touchscreen size – after an update in 2019 – to 10.25 inches for the hybrid and electric versions, while petrol models receive an 8.0-inch centre control display. Crucially, it also increases the wheel size to 18 inches, which unfortunately has an impact on the ride, making the Kona feel firm. Premium SE adds further to the generous equipment list with heated and ventilated leather seats, a head-up display and a heated steering wheel, plus front parking sensors.

Premium GT trim is available exclusively with the 1.6 T-GDi 4WD petrol and adds full-LED headlights and tail-lights, a larger driver's information screen in the instrument cluster, and some additional safety features, including pedestrian recognition as part of the autonomous emergency braking function.

For an alternative review of the latest Hyundai Kona SUV visit our sister site carbuyer.co.uk