If you’re planning to tackle that winter grime on your car,  you will need one of these. Wash mitts don’t just minimise the risk of scratching the paint, but they also make the job easier on the hands. Use hot wash and rinse water, plus slip your hands into workshop gloves before putting on the mitt, to avoid frozen fingers, painful knocks on grilles and the like.

Even in better weather a mitt is the answer; the fibres hold lots of water to lift grime off bodywork and retain grit, releasing it when you rinse. There’s a choice of designs and materials, so which of these 10 will make your winter wash scratch and pain free?

We checked cleaning but, as we’ve seen before, the results were difficult to separate. So we concentrated instead on how much water our test wash mitts retained after being soaked and drained for 30 seconds.

We also checked fit and ease of use, as well as useful factors like mesh panels, washing and instructions. Our final factor was price, taken from makers and online sources.

Multiple winner Kent’s 2in1 takes a clear victory yet again, while it's no surprise that Halfords’ very similar mitt secures the runner-up spot.

Kent retains its crown in a test where it has never been beaten since we started testing mitts back in the Noughties. The results were close here, though, with just a few areas where the 2in1 had a narrow advantage.

It’s easier to control than its rivals thanks to the couple of centimetres of stitching between the middle two fingers, so they don’t have to work as hard. The mitt better suits smaller hands, too, while the Kent also has a bit more padding to protect the fingers, plus a tighter cuff.

The 2in1 also has the edge in the soak test, although not by a critical amount. It is machine washable but there is no warning not to use fabric conditioner on the pack. Its keen price seals the win. A great example of ‘if it ain’t broke, don’t fix it’.

No prizes for guessing the inspiration for the Halfords mitt, which has the same microfibre noodle and mesh combination as the Kent. But there are differences. This wash mitt’s pouch is longer and wider, which helped it top our winner in the absorption test. But that pouch lacks the stitch between the middle fingers, so when the mitt is heavy it’s a touch harder to keep a grip of. It still works well and, at this cracking price, is worth considering.

Given Car Gods 54’s market positioning you might have expected the brand to opt for a sheepskin or lambswool mitt, but there’s lots to like about this noodle microfibre mitt. It’s very like the Kent, with similarly sized noodles, but the bug mesh is swapped for short-pile microfibre. The pocket is also a similar size, so it’s good for larger hands. 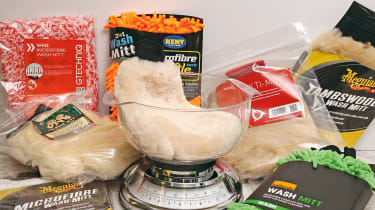 Its cuff is tight and by spreading the fingers it’s easy to control the wet mitt on large panels and grilles. It’s just behind the Kent in the absorption test, since it’s less thick, which also means less protection for fingers. There’s advice on cleaning before use but no mention of machine washing. Overall, this is a handy mitt, and choosing microfibre has kept the price competitive.

This is our pick of the mitts with natural materials. Sheepskin is used in Dodo Juice’s tribute to the cuddly Star Trek creatures, and it’s a joy to work with. The thumb hole makes it easy to grip and control the leather pouch, plus there’s a tight cuff. The pile is thick and hoovers up water. If you hate the idea of a mesh anywhere near your paint, this is a great choice, although it does take some looking after and is unlikely to last as long as man-made materials.

Massive thirst for water helps this microfibre mitt from detailing specialist Angelwax into our top four on its test debut. It cleans easily, too, but the pouch is a bit big and something a little more compact would be easier to handle. The cuff could be tighter as well. It may work well on the car, but the instructions are non-existent on the packaging, and you need to go to the website for washing info and product details.

Another from the Dodo Juice school of mitt design, with a similar sheepskin pouch and thumb hole. You can also feel the sheepskin inside the mitt. Unsurprisingly it was as good to use as the Tribble Mitt, but its pile looks shorter and it didn’t gain as much water in our absorption test. Bilt-Hamber traditionally has minimal on-pack instructions, but this doesn’t even feature a label, and you need to go to the website for product information.

If you want a natural cleaning face plus a bug mesh, then this Meguiar’s mitt is a decent option. It lacks the handy thumb grip of the Dodo Juice or Bilt-Hamber, and the pile seems shorter and less soft, which is perhaps reflected in the absorption test result. The pouch is lined and dries more quickly than them, too. It is snug, though, with a tight cuff making it easy to control even when heavy with water. On-pack instructions are handy.

Price puts this Meguiar’s mitt ahead of a tightly packed midfield. Despite the short microfibre pile, it retained a decent amount of water in the absorption test, but we still have the same problems we’ve always had with this Meguiar’s product. The cuff is loose and the pouch too big to control easily once it’s heavy. A nip here and a tuck there would help this mitt no end.

Mottled red-and-white short-pile microfibre and a white cuff would suggest this is a dead ringer for the Angelwax, but we found a major difference in our absorption test. There was 200g between them, and we repeated the test several times to check it. That explains the half-star difference here. Otherwise the mitts performed the same, with an oversize cuff and pouch, although the WM2 has better instructions.