SEAT has released its first teaser image for the facelifted Ateca SUV. The updated model will make its official debut next week, sporting a few technology updates and a range of design tweaks lifted from its larger sibling, the Tarraco. SEAT hopes this will keep the Ateca competitive with the likes of the Nissan Qashqai, Volkswagen Tiguan and Peugeot 3008.

The revised SEAT Ateca will go on sale in the UK in July, with first deliveries expected to arrive in August. Prices should remain similar to those for the outgoing model, starting from around £23,000 for the entry-level SE variant and climbing to roughly £37,000 for the flagship Xcellence Lux model.

SEAT’s official image gives us our best look yet at the new Ateca’s rear-end styling. Updates include a new bumper, spoiler and undertray, plus a reshaped tailgate. The brand’s teaser video also confirms that the facelifted model will receive a pair of new LED tail lights with scrolling indicators, which share a similar design to the Tarraco’s.

The Ateca development cars we’ve already seen in spy shots hint at the rest of the Ateca’s updates. Up front, there’s a larger radiator grille, a pair of redesigned fog lamps and air intakes, a tweaked front skid plate and an updated front bumper. SEAT has also added the same creases into the Ateca’s bonnet as are found on the new Leon hatchback and the larger Tarraco SUV. 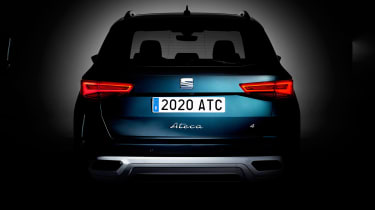 The most noticeable changes on the new Ateca will probably occur on the inside. The Ateca is based on the same MQB underpinnings as the Skoda Karoq and Volkswagen Tiguan, so we expect it will adopt the Volkswagen Group’s latest infotainment screen design, with fresh rotary knobs and touch sensitive buttons in place of the old Ateca’s physical switches.

SEAT has announced that the revised Ateca will receive an extended range of safety technologies. Details are yet to be confirmed, but we expect the car will feature a similar range of equipment to the Tarraco and new Leon. Likely upgrades include front assist, lane keeping assist, adaptive cruise control, a blind-spot monitoring system and a driver attention monitor.

We’re not expecting many mechanical changes, as the Ateca already uses the Volkswagen Group’s latest range of engines – including the company’s most recent 148bhp 1.5-litre four-cylinder TSI EVO petrol unit. Electrified powertrains are also unlikely to appear on the Ateca, as it would be too expensive for SEAT to re-engineer the SUV’s body-in-white to accommodate the battery packs and electric motors.

Are you looking forward to seeing the new SEAT Ateca? Let us know in the comments section below…