The fourth-generation Audi A8 edges even closer to the segment-leading Mercedes S-Class, but still falls just short of its main rival, despite some impressive attributes. It’s beautifully made and sumptuously finished, but the S-Class is more comfortable, especially for rear seat passengers.

But this doesn’t detract from the fact that the A8 is a deeply impressive limo, as the big Audi comes with fuel-efficient engines, a superb minimalist interior design and more kit than ever on board.

The Audi A8 and longer wheelbase A8 L showcase the company's latest technology, including the TFSI e petrol/electric hybrid models. It's for sale in the luxury limousine sector, and with a starting price of around £70,000 (with the A8 L around £4,000 more than that), it's not a purchase for the faint hearted.

But what you get for the money is one of the most technologically advanced cars you can buy, as well as being one of the most comfortable. There's lots of interior space, while the gadgets on board are designed to make life as easy as possible, as well as boosting comfort. The A8 needs to be comfortable to challenge its rivals, which include the class-leading Mercedes S-Class, the technology-laden BMW 7 Series and Lexus LS, plus traditional models like the Jaguar XJ , Maserati Quattroporte and Bentley Flying Spur.

Under the skin, the aluminium chassis tech is something that Audi pioneered with the first A8 of 1994, while power comes from large capacity TFSI petrol and TDI diesel engines. These engines use Audi's new numbering system, so there's a choice of 50 TDI and 55 TFSI units. However, the numbers don't relate to engine size, but instead are given according to the power that they make. In this instance, the engines are 3.0-litre V6 units with either 282bhp (the TDI diesel) or 335bhp (the TFSI petrol). 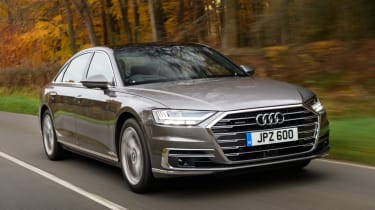 The 60 TFSI e plug-in hybrid uses a 3.0-litre V6 engine coupled with a small 14kWh battery supplying power to an electric motor. The motor produces 134bhp on its own, which brings the total output to 443bhp and 700Nm of torque. Drivers also benefit from an all-electric range of around 29 miles.

For those seeking an increase in power and performance, there's the flagship S8 model with a 4.0-litre V8 powerplant delivering 563bhp. However, you'll have to really want one to justify the £100,000 cost.

All cars come with a Tiptronic automatic gearbox and quattro four-wheel drive, so there's solid grip in all  weathers, and the A8 is a doddle to drive. Party tricks such as self-parking and adaptive cruise control also lend a hand to make the driving experience as relaxed as possible.

The rest of the standard kit list is equally impressive. There's LED lights front and rear, air-suspension for the most comfortable ride possible, high-definition touchscreen displays throughout the cabin and Internet connectivity. Go for the longer A8 L, and not only do you get more legroom, but the back seats get heating, separate climate controls and extra gadgets, including a removable tablet control system.