Honda is well under way with developing a replacement for the Civic Type R. And it should delight enthusiasts when it arrives in 2022 by shunning a hybrid powertrain.

The current Type R only landed in showrooms three years ago, but Japanese manufacturers work on significantly shorter production cycles, typically between four to five years, as opposed to the eight years employed by European rivals, such as Renault, Peugeot and Volkswagen.

Our spy photographers have caught the very first prototypes of the upcoming hot hatch on the road, which clearly show that the Type R will increase in size. The wheelbase is visibly longer than today’s model, while the front overhang is more pronounced, too.

Although still heavily disguised, styling changes appear to be evolutionary; this mule shares the same fastback silhouette, enormous rear wing and broad front splitter as the outgoing model. At the rear, more horizontal tail-lamps make an appearance, while the offset exhaust will be replaced by a centre-exit unit on the production model, as hinted at by the cut-out in the rear bumper.

While Honda’s range shifts towards electrification, the next Type R won’t. The Japanese firm recently clarified its EV strategy by announcing that it aims to electrify only its ‘mainstream’ European line-up by 2022.

When asked if this included the Type R, Tom Gardener, senior vice president at Honda Europe, told us: “We have our main pillars that are going to be electrified. Clearly we have a very famous product, such as the derivative of the Civic, which I guess is what you are referring to in the Type R, but no decisions have been made on that yet.

“We’re very much aware of customers’ strong appreciation of the current model, and we’ll have to deeply consider the best progress forward.”

Expect the new hot hatch to make use of the existing car’s 2.0-litre four-cylinder turbocharged engine, but with power up from the current 316bhp, plus efficiency tweaks. It’s almost certain that the Type R will retain its six-speed manual gearbox and front-wheel drive set-up, too.

Production of the model will also move, from its current base in Swindon, which is due to close in 2021, to one of Honda’s facilities in Japan. 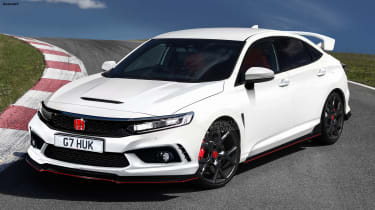 The very first Civic to wear the Type R badge was built in Japan as a three-door hatch. It had a 1.6-litre VTEC engine that developed 181bhp.

The EP3 generation Type R was the first to be manufactured at Honda’s Swindon plant and sold overseas. It was powered by a 197bhp 2.0-litre VTEC engine.

Two versions of third-generation Type R were launched: a four-door saloon for Japan and a three-door hatch for Europe, both with the same engine as the EP3.

Honda moved to a five-door hatchback body for this generation. The Type R also had turbo power for the first time, with a 306bhp 2.0-litre four-cylinder.

Current Type R will be the last produced at Swindon. It’s the most powerful version yet, with 316bhp, and was the first to be exported to North America.

What do you think of our exclusive Honda Civic Type R image? Let us know in the comments section…