The Mazda MX-5 is a unique proposition in the new car market, with the latest car continuing a proud tradition of sporty rear-wheel-drive two-seaters. The combination of modest power outputs and a nimble chassis mean it's a great way to learn about car handling, all the while delivering the kind of stellar reliability and everyday usability that similarly priced hardcore sports cars can’t match.

The fourth-generation Mazda MX-5 fits the classic roadster template and has plenty of thrills to offer. It's the planet’s best-selling two-seat sports car, and it has earned iconic status in its 25-year history, becoming as ubiquitous as the British sports cars it emulated when it first arrived in 1989.

The MX-5 Mk4 arrived towards the end of 2015, and was smaller, more efficient and more than 100kg lighter than its predecessor. Mazda's claim that the latest MX-5 returns to the original car's formula and offers a genuine sports car thrill still stands, but for buyers on a budget the MX-5 will be harder to justify as prices have crept up significantly. The entry price for wind-in-the-hair thrills is now approaching £24,000.

The Mk4 was updated in 2018 but in typical Mazda fashion it was a small facelift as a result of customer feedback. Both 1.5 and 2.0-litre versions received a small hike in power and became WLTP compliant, more standard fit safety kit was fitted, as was a telescopic steering column for a more comfortable driving position. Further revisions were made in early 2020 with a realigned model line up and additional standard equipment.

Power comes from 1.5 and 2.0-litre petrol engines, but choosing the former is no hardship and the MX-5 is equally enjoyable to drive with either engine. Four trim levels are available: SE-L, Sport, Sport Tech and GT Sport Tech.

The smaller engine is available on SE-L and Sport models, while the larger can only be had in conjunction with Sport Tech and GT Sport Tech trim further up the range. A six-speed manual is standard across the range. 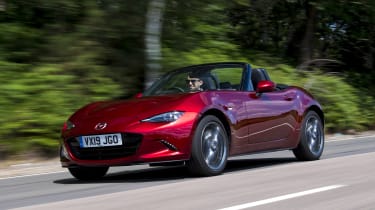 There are two body styles available: a convertible with a fabric roof and the folding targa hardtop of the RF. We prefer the former for its purer driver experience and looks, but those after a little more security and refinement will welcome the metal roof of the RF. It’s also the only model available with the option of a six-speed automatic (on 2.0-litre versions only).

Rivals for the Mazda MX-5 are scarce, but they do exist. Most obvious is the now-discontinued Fiat 124 Spider, which shares its running gear with the MX-5 but uses its own engine, while similarly sporty non-convertible rivals include the Toyota GT86, Subaru BRZ and Audi TT.

If you’re really serious about owning a sports car and don’t mind sacrificing practicality and comfort, it’s also worth considering the excellent – but incredibly old-school – Caterham 7 270.

For an alternative review of the latest Mazda MX-5 Convertible visit our sister site carbuyer.co.uk