Supercar start-up manufacturer Naran Automotive has teased what will become the company’s first ever road-going car.

Called the Naran, it’s a limited edition, V8-engined hypercar, which will act as a rival for the Ferrari LaFerrari, Aston Martin Valkyrie and McLaren Speedtail.

The Naran is currently being pushed through the final stages of its development cycle, with and the new company is conducting handling and top speed tests at Imola and the Nurburgring. The finished hypercar is expected to go on sale in mid-August, with production being strictly limited to just 49 examples. 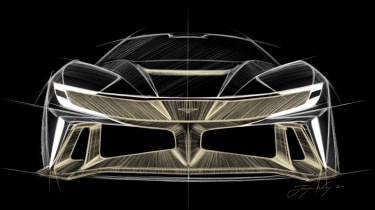 Other than the unusual location of the engine, the Naran’s design looks set to follow the traditional hypercar rulebook, with a low nose, flared haunches and an enormous rear wing. The company has also confirmed that much of the car’s body will be made from a blend of carbon fibre and natural flax – which will help keep its kerb-weight below 1,500kg.

The broad intakes on the company’s design sketch and wide diffuser on the car in the teaser image also suggests the finished product will feature some form of underfloor aero setup or venturi tunnel, as found on the Aston Martin Valkyrie. In total, Naran Automotive claims its new hypercar will generate around 450kg of downforce.

The project is backed by Indian-Zimbabwean businessman Ahmeer Naran, supported by former Jaguar Land Rover engineer Steve Pegg, as well as automotive designer Jowyn Wong – who is best known for his work on the Apollo IE.

What do you make of Naran Automotive’s upcoming hypercar? Let us know in the comments section below…