The Toyota Hilux pick-up truck has been facelifted for 2020, with a range of styling revisions, improved cabin technology and a more powerful diesel engine. The revised model will go on sale in the UK in November, with prices expected to start from around £25,000.

Inside, there’s an updated analogue instrument cluster with a new central display, as well as an improved eight-inch infotainment system with a pair of rotary controls. Apple CarPlay and Android Auto are both included as standard, along with satellite navigation.

The updated Hilux’s equipment list includes front and rear parking sensors, keyless entry and start, automatic air-conditioning and a nine-speaker JBL stereo system with an 800W eight-channel amplifier. Buyers can also choose from a range of accessories such as roller bed covers, a locking tailgate and a 12-volt power supply for the cargo bed. 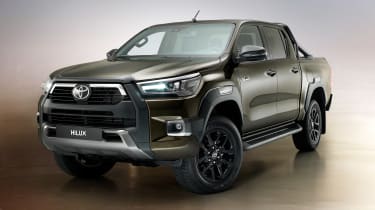 Fuel economy and emissions figures for the new engine are yet to be finalised, but Toyota expects them to be around 36mpg and 200g/km of CO2 respectively. All UK versions of the Hilux also come with four-wheel-drive – and buyers can have their choice of either a six-speed manual or six-speed automatic gearbox.

Chassis upgrades include a tweaked set of shock absorbers, new bushings and improved leaf springs for the rear axle, which Toyota says offers a smoother rider. Toyota has also lowered both engines’ idle speed from 850 to 680rpm, which allows for better control when crawling over rutted surfaces.

What do you make of the updated Toyota Hilux? Let us know in the comments section below…