Ever wondered what the best-selling car in the UK is? Well the Society of Manufacturers and Traders (SMMT) has revealed the top 10 for May 2020 and once again, the Tesla Model 3 has taken top spot.

Tesla's all-electric saloon managed 852 sales to nail first place in May, it remains outside the top 10 for the year, however.

Coming in at second for May is the Vauxhall Corsa. The Corsa's total of 790 for May shows a huge improvement over its 264 for April and perhaps signals a return to form for the wider new car market.

After dropping out of the top ten for April, 2019's best-selling car and this year's current sales leader, the Ford Fiesta, managed to sell 760 examples in May. This rise in form across the board can be attributed to car dealers once again opening up dealerships.

The Ford Fiesta dropped outside the top ten in April with just 55 units, but Britain's best-selling car is returning to form as dealers begin to reopen as it made 760 sales taking it to third place for the month. With no car performing well during lockdown, there's no change at the top of the best-selling cars list for 2020.

2019's second best-selling car had a terrible April, managing only 40 sales. The Volkswagen Golf doesn't even make it into the top ten for May but thanks to bumper month in February it retains second place overall. 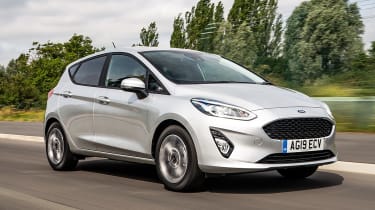 The Ford Focus is sitting comfortably in third for 2020. A poor May didn't impact it's position on the overall chart, despite it only managing 502 sales, it came fifth for the month. As lockdown eases and dealerships reopen expect sales to climb – a new Volkswagen Golf coming out this year will make life more difficult in future, however.

The Vauxhall Corsa was the UK's fourth best-selling car in 2019 and it's staying fourth for 2020 so far. A second place in May has done little to help its overall sales record for the year however with just 790 cars sold – highlighting the devastating impact the nationwide lockdown has been on car sales.

The Qashqai had a strong start to 2020 with 4,608 registrations in January but it had a disappointing February with only 1,293 registrations. March was a much healthier showing for the popular crossover with 5,907 registrations. April follows the general form for the industry – only 49 Qashqai's were sold. The best-selling SUV in the country felt the full force of lockdown in May as the Qashqai dropped out of the top ten best sellers list.

Prior to lockdown, the A-Class sold well thanks to its premium image and competitive finance deals from Mercedes. The A-Class came fifth last year with 53,724 registrations and sits in sixth place so far this year. Fourth place in May sounds much worse when you factor in only 552 A-Class' were sold. Mercedes as a whole managed to shift 2,002 cars in May, second only to Ford's 2,111.

The MINI has had a strong 2020, but it too succumbed to the issues of lockdown – only 22 MINI Coopers were sold in April and it dropped out of the top ten for May. A new all-electric model should help expand the car's popularity with emission-conscious buyers.

The Kia Sportage did not feature in the top 10 for February but the Korean SUV did have a strong January and March. With 8,710 registrations in 2020, it's the second best-selling SUV in the UK this year. Thanks to a lack of sales across the industry it keeps it's eighth-place, despite dropping out of the top 10 for May.

The BMW 3 Series dropped out of the top 10 in April with just 39 registrations and remains outside the top 10 for May. With 8,166 registrations so far this year it's still the best-selling saloon car in the UK.

The sixth-generation Volkswagen Polo clinched ninth spot in 2019 with 37,453 registrations. It only managed 7 registrations for April and remained outside the top ten for May, suggesting the Polo is feeling the effect of buyers not being able to visit showrooms.

Looking to buy a new car in 2020? Check out our list of the best finance deals available right now…