Audi isn’t in the habit of introducing mediocre cars, and the Q2 shows what the company is capable of. With its smart design, brilliant cabin and efficient engines, the Q2 is everything you’d expect of the Volkswagen Group’s poshest mainstream brand. As a new buy the Q2 is expensive, especially the models higher up the range. Indeed, for many people the Q3 makes more sense from a financial perspective, and because the Q2 holds its value pretty well, it’s no bargain on the used market. But if you want a premium small SUV, your options are limited, so high purchase (as well as running) costs aside, the Q2 is very easy to recommend. Think of it as being reassuringly expensive.

Audi’s first SUV was the vast seven-seat Q7, which was launched in 2006. It was a smash hit, while the smaller Q5 and Q3 models that followed proved no less successful. A decade after the Q7 appeared, Audi launched its smallest SUV of all, the Q2.

Thanks to UK buyers’ penchant for premium badges and compact SUVs, the Q2 has proved another smash for Audi. And while it’s more interesting to look at than Audi’s larger SUVs, it’s definitely not a case of emperor’s new clothes, because the Q2 is as good to drive as it is to sit in and look at. The fact that it has surprisingly few direct rivals makes it an even more appealing proposition.

Within weeks a 148bhp 2.0 TDI was on offer, which came only with an S tronic auto and was available with either front-wheel drive or quattro four-wheel drive. In August 2017 a 187bhp 2.0 TFSI quattro arrived.

We wouldn’t steer you away from any of the engines or transmissions because they’re all slick; even the entry-level 1.0 TFSI petrol provides more than enough punch whether you’re in the city, the countryside or on the motorway. Entry-level SE trim is quite rare on the used market, but is hardly spartan, given that it features 16-inch alloy wheels, a seven-inch touchscreen infotainment display, cruise control, rear parking sensors and a multifunction steering wheel, plus electrically operated, heated door mirrors.

The Sport gets 17-inch alloys and adds selectable driving modes, sports seats, automatic lights and wipers plus an upgraded stereo. As with the SE, the Sport comes with halogen headlights, but S line models feature LED lighting, 18-inch wheels, sharper body styling, part-leather trim, illuminated sill plates and the option (at no cost) of sports suspension.

Black Edition removes all silver trim, while the launch-only Edition 1 got lots of kit, including 19-inch alloys and Nappa leather.

The BMW X2 and Mercedes GLA are the smallest SUVs from their respective manufacturers, but the X2 is a closer rival to the Q3, and the GLA is more of a raised hatchback. As a result, the closest Q2 rival is the MINI Countryman, which is 10cm longer. It’s plentiful, good to drive, comes with efficient petrol and diesel engines (as well as a plug-in hybrid), and it’s well made.

The Mazda CX-3 is also well built and looks smart, has a great cabin and is dynamically accomplished. Cheaper than the Audi are the Renault Captur and Peugeot 2008, which have sold in big numbers; just like the Nissan Juke, they can’t match the Q2’s class, but they’re cheaper to buy as a result and there are plenty available.

Also from the VW Group are the SEAT Arona, Volkswagen T-Cross and Skoda Kamiq, all of which are worth a closer look.

The Q2 comes with a tyre repair kit. A space-saver spare wheel will fit in under the boot floor, but not a full-size spare. 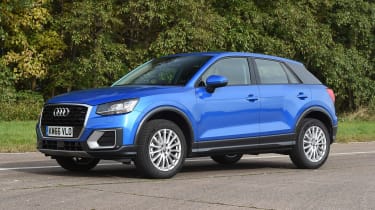 Regardless of which Drive Select mode you choose, at start- up the Q2 will always revert to Eco, so you’ll have to change it each time.

Some owners of 1.5 TFSI models have complained of poor throttle response and jerkiness when starting up and setting off cold.

Extras that are worth seeking out include a panoramic roof, heated front seats and a rear-view camera, which usually come in upgrade packs.

As would expect of an Audi, the Q2’s interior consists of plenty of high-quality materials. The shutlines are tight and ergonomics are excellent; there really is very little to complain about.

Rear-seat space is better than in some rivals, but the Q2 is best viewed as a four-seater, because the rear middle seat is tight for adults. Boot space is decent at 405 litres, expanding to 1,050 litres with the back seats folded. A flat load bay is possible thanks to the standard adjustable boot floor.

The infotainment screen, which sticks up above the dashboard, might be viewed unfavourably by some, but this doesn’t affect its functionality.

Q2 owners can choose between fixed or variable servicing. The former means a service is required every 9,000 miles or 12 months, the latter allows up to two years and 19,000 miles between visits to the garage.

Once a Q2 is more than three years old it’s eligible for discounted maintenance, with services alternating between minor (£175) and major (£345). You’ll pay a little more than this for the first two years of maintenance, but not a significant amount.

The 1.4 TFSI and 2.0 TDI engines use a timing chain, which needs to be replaced every five years or 140,000 miles. An official dealer charges around £600, and replaces the water pump at the same time. Fresh brake fluid is needed every two years, at £70.

The Audi Q2 has been recalled four times since going on sale in 2016. The first occurred in November 2017, when 30 A3s and Q2s – all of which were manufactured in August 2017 – were recalled because rear hub failure  could lead to the possibility of a wheel detaching.

The electronic parking brake could accidentally release on 3,650 Q2s made between January 2017 and June 2018; the recall for this problem came in October 2018. A month later, another campaign affected 147 A3s and Q2s built between May and September 2018 – the issue this time was a rear head restraint could fail as a result of some poor-quality welding. This was also the reason behind the most recent recall, which came in July 2019. However, just one single Q2, which was built in February 2019, ended up being affected by this.

The Audi Q2 notched up a 52nd place (out of 75) in the 2020 Driver Power new car survey. Practicality was the biggest complaint from owners, particularly the lack of interior storage space and boot capacity. High costs were another downfall  – but for everything else the Q2 achieved decent scores, particularly for its infotainment. Every owner who has left a review of the Q2 on CarBuyer.co.uk has given it five stars