The all-new, mid-engined Chevrolet Corvette Stingray is on sale in the UK now via import, with prices starting from £81,700 for the coupe and £87,110 for the convertible. First deliveries are expected to arrive during the second half of 2021 – and, for the first time in the model’s 67-year history, the new Corvette will be offered to UK buyers in right-hand drive.

From launch, the C8 Corvette will only be available in Chevrolet’s generously equipped Launch Edition trim-level. Standard equipment includes a head-up display, a 14-speaker Bose stereo system, a rear-view camera and a pair of heated and ventilated sports seats.

Both the coupe and the convertible are powered by a naturally aspirated 6.2-litre V8 engine producing 495bhp and 637Nm of torque. Power goes exclusively to the rear wheels via an eight-speed dual-clutch automatic gearbox – and Chevrolet says that even the upcoming entry-level model will cover the 0–60mph sprint in less than three seconds.

Chevrolet also offers a broad range of customisation options for the C8 Corvette. Buyers can have their pick of twelve exterior colors, six interior finishes and six seat belt colours. There’s also a choice of three seat types, each with their own upholstery and stitching options.

Chevrolet says the new Corvette was engineered “first and foremost as a convertible.” As such, the American brand says it retains the same boot capacity as the hardtop version, with the ability to carry two sets of golf clubs – even with the roof down. 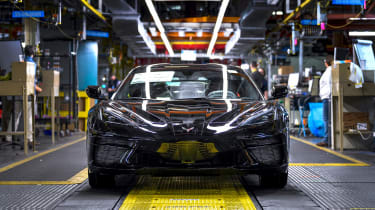 The roof is powered by six electric motors, which Chevrolet says are more reliable than a traditional hydraulic system. It can be lowered in 16 seconds at speeds of up to 30mph, and features an electrically operated glass divider between the cabin and the engine. The car’s tonneau cover also comes with an additional vent to aid cooling.

As standard, the Corvette’s two-piece convertible hardtop is finished in the same colour as the rest of the car’s body, although buyers can opt for a carbon flash metallic black paint finish. In addition, the roof and tonneau cover are both made from composite materials, to help keep weight at bay.

Chevrolet’s engineers paid close attention to the C8 Corvette’s aerodynamics, adding side intakes for engine cooling and pass-through air-flow ports on the car’s rear bumper. Also, despite the layout change, it’s styling apes that of Corvettes past, with fighter-jet-style angles, an aggressive nose and the brand’s trademark L-shaped tail lights.

The C8’s interior is a little more unconventional. The infotainment screen is tacked onto the side of the digital instrument cluster and there’s a long row of buttons running down the centre of the cabin, which control the car’s heated seats, demister, air conditioning and drive modes.

Of course, Chevrolet knows that Corvette purists will wail about the fact that the engine isn't at the front – but the company remains confident in its decision to update the model’s layout. During the car’s official launch event in Los Angeles, Tadge Juechter, chief engineer for the new Corvette, said: “This is the right time to move to mid-engine. We’ve known for quite a while that we were reaching the end of what the front engine layout could do.”

In another blow to Corvette purists, the previous model’s manual transmission option is gone for good – although the new automatic transmission has a manual mode, which is controlled by a pair of paddles mounted behind the car’s steering wheel.

There’s also a plethora of drive modes which allow the driver to customise the Corvette’s throttle response, steering weight and transmission shift ferocity, while a brand-new Z-Mode – which is similar to the M-Mode button the old BMW M5 E60 – allows drivers to activate a fully-customisable performance mode with a single press.

What do you make of the new Chevrolet Corvette convertible? Let us know in the comments section below…