The XC60 has gone on to become Volvo's best-selling model, and the latest car will continue that trend. Like its big brother, the XC90, the XC60 takes a more comfort-oriented approach than its rivals, and that means it’s less dynamic than models like the Jaguar F-Pace and BMW X3.

However, it adds a level of tech and quality that beats most of its rivals, while space inside is good, too. In fact, the XC60 will be a very easy car to live with day-to-day. The 2.0-litre four-cylinder engine range spans diesel and petrol power, plus T6 and T8 Twin Engine plug-in hybrids that offers excellent straight-line performance and big company car tax savings for business users.

Volvo is on a roll at the moment, and the current XC60 demonstrates what's so good about the company's latest range of cars. Volvo has long been known for its strong safety credentials, but the XC60 displays the company's latest design direction, with smart looks inside and out and a raft of technology on board to appeal to even the most tech-savvy buyer. But this hasn't come at the expense of practicality, and the XC60 is a versatile five-seat premium SUV that delivers comfort and luxury in a great package.

The second generation XC60 went on sale in 2017, replacing the Mk1 model which had become Volvo's best-selling car during its life. The Mk2 uses a scaled down version of the platform found under the XC90, and as a result has the same suspension and engine range as the seven-seater. As a result, the XC60 is a rival for premium compact SUVs such as the Audi Q5, BMW X3, Jaguar F-Pace, Alfa Romeo Stelvio and Land Rover Discovery Sport, among others.

Sticking with the XC90's platform means there are a range of 2.0-litre engines available – with, D4, B4 and B5 diesels joined by B5 and B6 petrol units. The D4 oil-burner is front-wheel drive only, while the B4 and B5 versions send power to all four wheels. Power outputs rise gradually with 187bhp, 194bhp and 232bhp, respectively.

The B5 petrol variant delivers 247bhp and is offered with either front- or all-wheel-drive, while the B6 is only available as a 4×4 with a more potent 296bhp.

Badged as 'Recharge' models, there are three plug-in hybrids included on the price list – the T6 with 335bhp, the T8 producing 385bhp and the top-of-the-range T8 Polestar Engineered delivering 399bhp. 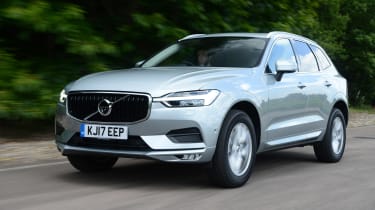 Even Momentum models are well equipped, but then prices start from just over £40,000, which is a significant jump over the old XC60 and puts all models into the upper road tax threshold, meaning road tax is £475 (£465 for the T6 and T8) for years 2-6 of ownership.

For an alternative review of the latest Volvo XC60 SUV visit our sister site carbuyer.co.uk