The Volvo XC40 is a strong contender in the market for small premium SUVs. It’s not a revelation on the road, but it strikes a decent blend of comfort and cruising refinement, and offers premium SUV appeal in a small-car package. This allows passengers to enjoy the funky, minimalist cabin and the capable infotainment system.

Factor in competitive pricing when compared to rivals, as well as Volvo's traditional focus on safety, and you’re left with one of the most appealing offerings on the market. That's why we made the XC40 our Small Premium SUV of the Year in our 2018 New Car Awards.

Introduced in 2017, the Volvo XC40 is a mid-sized premium SUV that majors on practicality and comfort while offering bold styling that helps set it apart from its more conservative rivals. Its great safety rating and suite of available active safety systems will help Volvo get closer to its aim of eliminating all serious injuries and driving deaths in its cars by 2020.

In terms of size and price, the XC40 slots into the Volvo SUV range below the XC60 and XC90, and is offered in the same Momentum, R-Design and Inscription trims, although there is a single Momentum Core entry-level version featured on the price list.

There's a similar engine range too, and the XC40 receives the latest mild-hybrid ‘B’ engines from its bigger siblings. Over the next five years, Volvo aims to launch a fully electric car every year, as it seeks to make all-electric cars 50 per cent of global sales by 2025, with the rest hybrids. Recharge will be the overarching name for all chargeable Volvos with a fully electric and plug-in hybrid powertrain.

Where the XC40 stands out is with its fresh looks. The chunky lines define it as an SUV, yet its compact dimensions mean it's no more manageable than a compact hatchback. Under the skin, the XC40 uses a new platform that will also be used for the next V40 hatchback.

Inside, the XC40 focuses on style, with a design-led interior that uses digital displays and quality materials to create an upmarket cabin which can be upgraded with a variety of individual options.

Power comes from a range of three and four-cylinder petrol and diesel engines that use Volvo's traditional T and D naming system and most were updated in 2019 to improve performance and economy. There are also B badged mild-hybrid petrol versions. 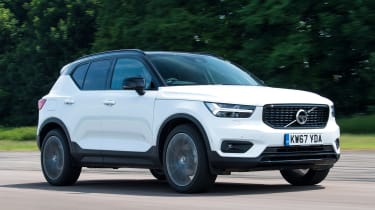 The range kicks off with four petrol units – the 127bhp T2 three-cylinder turbo engine, followed by a T3 badged 161bhp version, then a 194bhp B4 and 247bhp four-cylinder B5. The T2 and T3 are front-wheel drive, but the T3 is offered with an eight-speed automatic as well as the standard six-speed manual gearbox. The B4 and B5 models are all-wheel-drive and both come solely with the auto gearbox.

There are two diesel engines available, the 148bhp D3 and the 187bhp D4, both of which are four-cylinder units. The D3 has a six-speed manual and front-wheel drive as standard, but can be upgraded with an eight-speed automatic which also allows the addition of Volvo's four-wheel drive system. The D4 comes as standard with four-wheel drive and an auto box.

The 262bhp Recharge T5 Twin Engine hybrid sticks to front-wheel drive and an automatic gearbox, while Volvo has also introduced the XC40 P8 pure electric model with all-wheel-drive and 402bhp.

Volvo has matched the base Momentum Core trim with the lower-powered 1.5-litre T2 petrol engine to create a single entry-level model. This is followed by three main trim levels – Momentum, R-Design and Inscription, which offer lots of kit as standard. Customers can also upgrade R-Design and Inscription to Pro spec for around £1,500.

The Momentum model is well catered for, although there is a significant asking price of around £30,000. It comes with dual-zone climate control, 18-inch wheels, rear parking sensors, auto wipers, auto-folding door mirrors, cruise control and digital instruments all included. Also on board is Volvo’s excellent nine-inch portrait-layout infotainment system.

Inscription is the plushest XC40, but is an upgrade over Momentum trim, rather than R-Design. It adds ambient lighting, a powered tailgate, metallic paint, front parking sensors and a matt-silver finish on the front and rear skid plates. Again, Pro adds more kit, including 19-inch wheels and LED front fog lights.

For an alternative review of the latest Volvo XC40 SUV visit our sister site carbuyer.co.uk