In 2016, the Astra K was European Car of the Year, so it’s no lame duck, despite disappointing results in our Driver Power surveys in 2019. There’s no knockout styling, class-leading warranty or brilliant dynamics, while owners’ forums suggest reliability can be an issue with early cars. While Vauxhall’s lack of badge appeal steers some people away from the Astra, this hatch has plenty to recommend it. It’s no class-leader, but you get plenty for your money, the roomy cabin is comfortable, plus the large sales volumes and lacklustre image conspire to ensure that the Astra can make a sensible – and good value – used buy.

In recent years car buyers have been drawn towards either bargain basement or premium car makers, which has made life difficult for firms between those extremes.

One such brand is Vauxhall, which sits very much in that middle ground by offering decent cars, but ones with little in the way of unique selling points. It’s been the same way since well before the first Astra went on sale 40 years ago, and we’ve had many versions that have been average at best; however things took a turn for the better with the Mk6, in 2009.

That car was so good that when Vauxhall replaced it in 2015, it was with a model that didn’t look a lot different, arguably because it didn’t have to. But how does the seventh-generation iteration stack up on its own, and should you buy a used one?

Initially the car came only as a five-door hatchback, but by March 2016 there was a five-door estate, called the Sports Tourer, with the same engines and trims as the hatch. From April 2018 a new range-topping Ultimate trim was offered only on the hatch.

All of the engines, gearboxes and trims are decent enough, but the non-turbo 1.4 feels weak compared with the alternatives. Entry-level Design trim gets 16-inch alloys, air-con, cruise control, electrically adjustable, heated door mirrors, all-round electric windows and a seven-inch touchscreen with Bluetooth.

The Ford Focus is at the top of this segment in terms of sales; with a wide model range, keen prices and superb dynamics, it’s hard to beat. But VW’s Golf gives the Ford a run for its money due to excellent engines, a classy cabin, hi-tech equipment and refinement.

The SEAT Leon is more keenly priced, while the Mazda 3 is a blast to drive, has a superb interior and is well equipped. The Hyundai i30 and Kia Ceed provide a great balance of space, kit, build quality, reliability and value, while the Peugeot 308 is worth shortlisting for its comfort and low running costs. 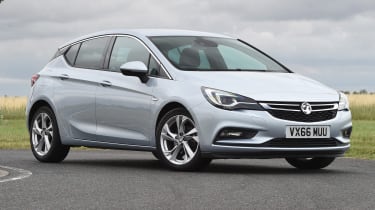 Fuel gauges in early examples of the Astra K could under-read at times, but software updates should have fixed this on most cars by now.

The Astra’s 1.4-litre turbocharged engine can suffer from a flat spot at around 3,000rpm, especially when the motor is under load.

The Astra’s dash looks quite modern and of a high-quality finish; it’s also fairly user-friendly. Some cars had glitches with Android Auto smartphone integration, but software updates should have fixed them. Cabin space is good, with lots of room for four people, although it’s tight for five. The boot is a competitive 370 litres with the seats up, or 1,210 litres with them down; the estate has 540 and 1,630 litres.

Engines are chain-driven, except the 1.2 turbo, which has a wet cambelt with no fixed replacement interval. Only cars built from 2019 have this, so none have needed a new belt yet; neither Vauxhall nor its dealers could give us a cost to fit one. We’d expect a charge of £300-£400, with 100,000+ miles likely between replacements.

The Astra K has been recalled four times. In December 2016 airbag issues affected 1,745 cars (including some Merivas). Brake-hose issues saw 713 Astras recalled in July 2018; only officially converted police cars were affected. Braking problems caused the third action in December 2018, where 37,167 models had a series of unspecified faults. In October 2019, 1,688 Astras and Insignias were recalled for poorly welded seat frames.

The Astra Mk7 crept into the Driver Power 2019 New Car Survey in 75th place (out of 75); it was 70th out of 100 in the Used Car Survey. It didn’t score highly in any area; the only ones in the top 30 were for infotainment and the convenience of the switch positioning. Most scores were mid-table, but front-seat comfort, interior quality and the brakes all came towards the bottom