Renault hasn’t disappointed with the latest Captur – performance is fine, running costs are sound, and the level of standard equipment is strong, so the Captur looks like a great choice. Buyers in this class demand style, flexibility and value for money, and the new model has undergone a complete overhaul to help it stand out in an increasingly competitive crowd of rivals.

It may not deliver the dynamic drive of the Ford Puma, or the quirky design of the Peugeot 2008, but few models in this class deliver across so many key areas for customers. So, if you’re after a versatile, all-round performer, then the Renault Captur should definitely be at the top of your shopping list.

Back in 2013, the small SUV market was just starting to take shape. The bigger Nissan Qashqai was a proven sales success and car makers realised how much drivers appreciated the crossover style of an elevated driving position matched with the compact dimensions of a five-door hatchback. Nissan was quick off the mark to enter the space below its Qashqai with the launch of the supermini-sized Juke, although the Peugeot 2008, MINI Countryman and Ford EcoSport were also vying for new customers.

Renault spied an opportunity and applied the crossover formula to the underpinnings of  its best-selling Clio hatchback to create the original Captur. It wasn’t a sporty hatch, nor was it a mundane family wagon, instead the stylish Captur offered the lofty driving position of a proper SUV, increased space for the family, good levels of standard equipment and low running costs.

But, despite a facelift in 2017, the Captur was beginning to look a little long in the tooth, especially when compared to the tech-laden Peugeot 2008, the dynamic Ford Puma and a trio of quality Volkswagen Group rivals in the shape of the Skoda Kamiq, SEAT Arona and VW T-Cross. As if that wasn’t enough to contend with, there’s also Mazda’s sporty CX-3 and the leftfield Fiat 500 X. 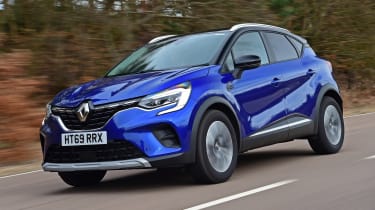 Renault has got the basics right by ensuring the latest Captur remains good value, with prices starting at around £18,000 and rising to just over £25,000 at the top of the range. It sits on the same CMF-B platform as the latest Clio, which can only be a good thing – bringing extra quality to the way the Captur steers and a comfortable ride for all on-board.

The new five-door Captur is 110mm longer, 19mm wider and 17mm taller than the model it replaces, adding much-needed interior space for the family, while there’s a wider grille and LED lights at the front and rear, helping it to cut a more impressive figure on the road. Customers that wish to really stand out from the crowd are well catered for – there’s a  choice of ten exterior body colours and four roof colours, along with customisation packs that offer further styling accents.

Renault continues to aim the Captur strictly at urban life. No four-wheel drive versions are available and engine choices consist of three petrol units, two diesels and a plug-in hybrid. The base petrol 1.0-litre TCe 100 produces 99bhp and is followed by the 1.3-litre TCe 130 and TCe 155, developing 128bhp and 153bhp respectively. The diesel options are made up of a 1.5-litre engine with two power outputs – the Blue dCi 95 with 94bhp and the Blue dCi 115 delivering 113bhp. Renault has also introduced a greener plug-in hybrid to the range. The Captur E-Tech uses a 1.6-litre petrol engine coupled with two electric motors for a 158bhp total output.

Renault has streamlined the Captur range making it easier for customers to understand the price walk from entry to top-spec models. Four equipment levels are available: Play, followed by Iconic, S Edition and the BOSE Launch Edition. Standard equipment across the range is excellent, with full LED front and rear headlights, auto folding power-adjustable side mirrors and rear privacy glass, plus a 7-inch touchscreen with Apple CarPlay and Android Auto connectivity, Bluetooth and a DAB radio.

The small SUV class is aimed at the growing family looking for style, space and plenty of safety kit. Renault has ticked all three boxes, but particularly the latter, as all models feature a host of equipment designed to protect and secure the driver, passengers and pedestrians when on the road.