After hedging its bets with the crossover/MPV looks of the Mk1, the current Peugeot 3008 is a genuine front-runner in the crossover class. That’s thanks to its top-notch interior, up-to-date in-car tech, refined drive and competitive engine range.

It’s also practical and good to drive, if not quite as enjoyable as some other rivals. It’s comfortable, too, with a well-judged ride that’s firm enough to stop it feeling bouncy, but soft enough to glide over bumps in the road.

For many, the Peugeot 3008 will offer everything they need: it’s economical, practical and upmarket, all at a reasonable price. If you’re after a small SUV or crossover, the 3008 should definitely be one to consider.

The Peugeot 3008 is arguably one of the most stylish SUVs on sale, so it’s good news that it backs up its smart looks with a practical five-seat cabin, good build quality, strong engines and a decent driving experience.

The current 3008 arrived in 2016, with a smart look and improved practicality over its MPV predecessor. There's plenty of space inside for five (if you want more room and seven seats, you'll have to go for the larger 5008, which uses the same platform as the 3008), while the engine range offers a decent mix of efficiency and performance.

It needs these attributes to compete in the fiercely competitive crossover class. Chief rivals are the Skoda Karoq and SEAT Ateca, which share the same platform and offer a similar blend of talents as the 3008. There's also the sporty handling Mazda CX-5, plus practical rivals such as the Ford Kuga, Nissan Qashqai, Renault Kadjar, Kia Sportage, Hyundai Tucson, Honda CR-V and Toyota RAV4.

The other significant rival is the Vauxhall Grandland X, which shares its platform and running gear with the 3008, but drapes it in less extravagant bodywork.

Where the 3008 excels is with its comfort and practicality. The cabin is plush with plenty of kit on all models, although potential buyers should try out the car's i-Cockpit cabin layout to see if it suits them. This places the dials above a small steering wheel, rather than viewing them through the steering wheel, but some drivers may find their ideal driving position obscures them. This is less of an issue in the 3008 than in other Peugeot models, but worth noting anyway.

Petrol units include a 1.2 PureTech 130 three-cylinder turbo petrol and the four-cylinder 1.6-litre PureTech 180 petrol. In test, we've found the 1.2 PureTech to be a surprisingly good performer considering its size, and it's the engine we'd choose. 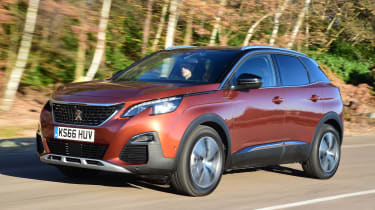 Diesel power was updated in 2018 with a new 1.5 BlueHDi 130 diesel, which replaced the 1.6 BlueHDi 120; the top of the range is powered by the potent 2.0 BlueHDi 180. The latter is exclusive to the GT model, while both will be handy for towing.

There are also two plug-in hybrid models to choose from – the Hybrid 225 e-EAT8 and Hybrid 300 e-EAT8. The former uses one electric motor alongside its 1.6-litre petrol engine, while the latter uses two – one for each axle. Both use an 13.2kWh battery that can be charged in a claimed one hour and 45 minutes via an optional on-board charger.

Depending on which engine you choose there’s a six-speed manual or eight-speed automatic.

Four-wheel drive isn't available on the majority of 3008 models. Peugeot has developed its Grip Control system that can do most of the things 4WD can do, aside from the most extreme off-roading. Where fitted, it adds a rotary controller to the centre console that allows you to select the driving mode suitable for the terrain, whether it's snow, gravel, mud or tarmac.

There's no entry-level Access model, so the range kicks off with the relatively well equipped Active model. Beyond that, Allure, GT Line, GT Line Premium and GT trims are offered.

All models come with a decent amount of kit, with 12.3-inch digital dials, two-zone climate control and rear parking sensors all included, and the infotainment touchscreen is standard across the range. Allure models get 18-inch alloys, sat-nav and blind-spot detection among the extended kit list, while the GT Line gets a sportier bodykit and even more standard equipment.

For an alternative review of the latest Peugeot 3008 SUV visit our sister site carbuyer.co.uk