The adoption of plug-in hybrid power has done very little to dent the appeal of the Skoda Superb Estate. While it’s a little pricier than the conventional petrol and diesel models, the iV still undercuts rivals such as the Peugeot 508 SW Hybrid. And with new Benefit in Kind company car tax rates greatly incentivising low emission cars like this, the iV will, for many, become the pick of the range.

This is the Skoda Superb iV. It’s the second plug-in car to join the Czech brand’s line-up, following the Citigo-e iV. But while the dinky city car is fully electric, the Superb mixes petrol and electric drive in a plug-in hybrid system.

The petrol-fuelled element comes in the shape of a 1.4-litre four-cylinder turbo, and it’s paired up with a 113bhp electric motor and 13kWh battery. Charging takes place via a port hidden neatly behind the grille, and it takes three hours and 30 minutes to top up the battery from a 3.6kW wallbox.

Combined, the two systems offer 215bhp. That’s slightly short of one of this car’s closest rivals, the Peugeot 508 Hybrid, although the Skoda’s 0-62mph time of 7.8 seconds is half a second faster than the 508’s.

The Superb is also ahead in the refinement stakes. While the Peugoet can feel a little jerky when it switches between electric and petrol power, the Skoda is near-seamless. The biggest clue that something has changed comes when the power dial on the digital display flashes around into the tachometer section. For the most part, the engine just mumbles away in the background, and vibration is minimal.

It’s possible to switch through a variety of driving modes to make the most efficient use of the hybrid systems. The Superb defaults to E-mode – during our time with the car in cold weather, a full charge promised just over 20 miles of fully electric range – while Hybrid and Sport modes offer a choice between efficiency and performance. 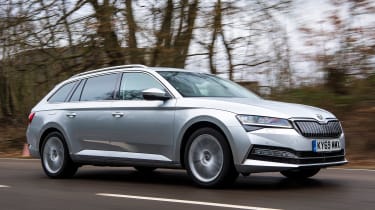 While some cars’ Sport buttons have little effect, the Skoda changes character. All Superb iVs get adaptive dampers as standard, and in their default setting the car has a soft and wallowy feel – amplified by the fact the iV is heavier than the traditional combustion variants. While Sport mode is slightly ambitious in name, it firms things up to the point that both pitch and dive is much better controlled.

Elsewhere, the iV comes with the usual Superb traits. The interior design is logical (if a little plain), cabin space is class-leading, and while the underfloor boot storage gives way for a charging cable cubby, the load space is still a vast 510 litres.

Our SE L test car came with a selection of upgrades; a rear parking camera (£375) will likely come in very handy from time to time, while the optional Virtual Cockpit brings the instrument panel bang up to date.

This car also features an £805 tow bar, although the iV isn’t the best Superb to buy if you’ll regularly be hauling a large trailer. The iV has a maximum braked towing weight of 1,600kg, but the most powerful 4×4 diesel version is rated at 2,200kg.