The Porsche 911 Turbo S now joins the base Carrera to bookend the 911 range, and these are the two most natural models in the current line-up. This iconic sports car is stupendously fast, but it’s as happy driving around town as it is on a track because its ability really is that broad. There are some minor issues with the ride quality on bad roads, but the grip, poise and adjustability this gives the car as a result is well worth it. That Porsche’s halo car has lost none of its day-to-day usability makes the Turbo S a formidable package.

The 911 Turbo – and more recently the Turbo S – is Porsche’s halo car. It delivers the most of everything: power, torque, acceleration and top speed. So, you won’t be surprised to read that the all-new, £155,970 Turbo S still fills that role, yet the jump in the numbers is huge.

This 992 model features a new 3.7-litre twin-turbo flat-six engine that generates 641bhp and 800Nm of torque. It then sends that considerable force to all four wheels through a new eight-speed dual-clutch gearbox. With launch control, the car will romp from 0-62mph in 2.7 seconds, while its top speed stands at 205mph.

The result is the world becoming a greeny-yellow blur though the side window as you squeeze the throttle to the floor exiting a sleepy village; between 30-60mph it’s hard to imagine there’s a faster road car on sale.

From price to performance then, every number associated with this machine has been pushed further. But, with that push for more, is the Turbo S still a driver’s car?

Decidedly yes. The front track is a huge 42mm wider than its predecessor’s, and it means there’s barely a hint of understeer on our sun-baked, bobbly back-road test route.

Porsche has really cracked the integration of its rear-axle steering too, because this is the most natural-steering 992 we’ve driven.

You wind lock on at the correct rate instinctively, while the solidity and weight mean you feel the front axle is there to meet your request. Although we wouldn’t say the communication through the wheel rim is classic 911, there is some life to it.

The four-wheel-drive system and those four fat tyres find massive traction, too. Despite the car’s huge power and torque figures, you rarely see the ESC light blinking to indicate a less than resolute bond between the rubber and the road surface.

The engine’s broad spread of torque brings massive flexibility. There is a little turbo lag, but only really at low revs; it’s minimal and makes the acceleration on full throttle feel all the more explosive when the boost hits. For a heavily turbocharged engine, throttle response is excellent. 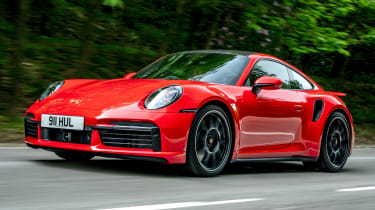 However, all 992-generation 911s thus far are turbocharged, so the Turbo S feels less distinct, but it does have its own identity.

The soundtrack is meatier than a Carrera S, characterised by a gruff, guttural bark low down in the rev range that climbs to a rasp overlaid with prominent hisses, coughs and flutters as its new, larger variable-geometry turbos spool up and then dump their boost.

But while the chassis has dynamic ability to match the ferocious engine, the Turbo S does have a few small chinks in its armour.

With the dampers and PDCC active roll control set to the normal mode, the Turbo S can sometimes pogo over undulations on B-roads. This is partly because you’ll be travelling at such a rate the dampers are having to contain enormous levels of energy – and they mostly do a good job.

In the sportier setting there’s less vertical movement thanks to the tighter control, but at 1,640kg on 20-inch front and 21-inch rear wheels, even in normal mode the ride feels firm over drains, potholes and other poor road surfaces.

The dampers don’t always surf bumps, sometimes trying to steamroller them into submission, but the ride is still at least as refined as any sports car with such pace, and better than rivals like the Audi R8.

However, there’s still a deft level of adjustability on the throttle and on the brakes, which means you can subtly trim the Turbo’s line within your lane.

That firmer character does at least mean the axles – particularly the rear – feel very rigidly located to the body too. And that’s what provides such sharp responses, inspiring confidence.

It’s a small trade-off to make, and one that means the car certainly hasn’t lost the duality of purpose it’s known for.

The 911 is still the most usable sports car on sale. Visibility is fantastic, and the two back seats give an extra 264 litres of luggage space on top of the 128-litre front boot. There’s not much tyre roar, the build and material quality is great, while the infotainment is as advanced and as easy to operate as you’d want.