Land Rover’s Special Vehicle Operations team is developing a range-topping V8-powered version of the all-new Defender, and these new spy shots give us a closer look at what could become the Defender SVR, which is expected to arrive in UK showrooms within the next 18 months.

From the outside, this development vehicle looks almost identical to the standard Defender 110. However, a few important details mark this mule out as Land Rover’s forthcoming rival for the Mercedes-AMG G 63.

The red-painted brake calipers from our previously spied mule have vanished, although the brakes fitted to this prototype are the same size, with six-piston calipers for the front axle and twin-piston units at the rear. There’s also the same quad-exit exhaust system poking out of the SUV’s rear bumper.

However, the biggest giveaway comes with a license plate check. This Defender prototype was registered with a 5.0-litre engine – all but confirming that it’s powered by the same supercharged V8 unit used in the Range Rover Sport SVR and Range Rover SVAutobiography.

It means that the Defender SVR could be the last model to use the marque’s 5.0-litre supercharged V8 engine, currently made in Ford’s Bridgend factory that is set to close later in the year. A power output in excess of 500bhp is expected. 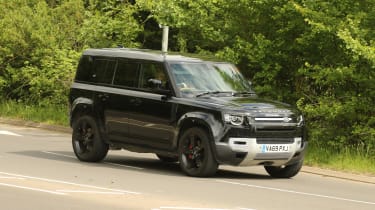 The Defender’s all-new, super-stiff aluminium-intensive platform is said to make tuning the chassis for a performance-focused model much easier. The new Terrain Response 2 system is likely to include a track mode, too, although Land Rover’s engineers are insisting that the Defender SVR will keep much of the standard model’s off-road ability.

These spy shots don’t reveal any exterior modifications, but they are expected. As shown by our exclusive images, the new Defender lends itself well to a hot makeover. Revisions will include new 22-inch alloys, flared wheel arches, reprofiled bumpers and enlarged air intakes – all of which will fool the eye into thinking the Defender is sitting lower to the road.

The three-door Defender 90, which is set to be launched in the middle of next year, would also suit Land Rover’s SVR treatment from an aesthetic point-of-view, but it’s expected that only the longer 110 five-door car will be offered as an SVR model.

Speaking at the launch of the Defender last September, Land Rover design chief Gerry McGovern said: “From a technology point of view, we say we’ve future-proofed it, so it’s got all the things from a technology point of view that will keep it going for a long time. Because of [the Defender’s] product orientation it gives us the ability to do more versions, and I think that’s the way we’ll go with it.”

It has been strongly rumoured that a BMW-sourced V8 is heading to future JLR models; the companies have already confirmed they’ll be working together on electric powertrains. A deal has apparently been agreed that will see BMW’s 4.4-litre replace JLR’s ageing 5.0-litre V8. The new engine is due to be rolled out across the JLR product portfolio and will eventually appear in the next Jaguar F-Type, Range Rover and Range Rover Sport models.

What do you think of our exclusive Land Rover Defender SVR images? Let us know your thoughts below…