Volkswagen has expanded the Mk8 Golf line-up again, with a new turbocharged 1.0-litre three-cylinder petrol engine. The new powertrain boosts the hatchback’s number of engine choices to six and lowers its entry-price to £23,300.

In the Golf, Volkswagen’s 108bhp 1.0-litre three-cylinder engine offers a 0–62mph time of 10.2 seconds and top speed of 126mph. Economy and emissions figures stand at 53.3mpg and 129g/km of CO2 respectively – and the engine will only be available with a six-speed manual gearbox in Volkswagen’s lower mid-range Life specification.

Later this year, the Mk8 Golf range will expand again, with Volkswagen adding its popular R-Line trim-level, along with a base trim, the Golf Estate and the performance-focused GTE, GTI, GTD and R variants.

Inside, there’s an equally comprehensive level of equipment, including a 10.25-inch digital instrument binnacle, wireless smartphone charging, a 10-colour customisable interior lighting setup and a 10-inch touchscreen infotainment system with sat-nav and voice control. Both front seats are adjustable for height and lumbar support.

The upper mid-range Golf Style starts from £25,470 and adds a set of larger 17-inch alloy wheels and a pair of tweaked LED headlamps, while the cabin gets wood-style trim inserts, more ambient lighting colours and “Art Velours” seat upholstery.

Buyers can also choose from a range of optional extras including Matrix LED headlamps (£875), a head-up display (£625), keyless entry (£400) and Volkswagen’s Dynamic Chassis Control system (£950), which adds a set of adaptive dampers.

A further five engines are currently available on the Golf, with buyers offered the choice of two petrols, a mild-hybrid and two diesels. After the 1.0-litre three-cylinder unit, the Golf’s petrol range steps up to a 128bhp turbocharged 1.5-litre four-cylinder unit, which is capable of 49.6–52.3mpg depending on the options fitted. A more powerful, albeit slightly less economical, 148bhp version of the same engine is also available, priced from £24,475.

The mild-hybrid-powered Volkswagen Golf eTSI is priced from £26,390. It features the same 148bhp 1.5-litre four-cylinder petrol engine, with the addition of a tiny electric motor. The system returns a claimed fuel economy figure of 49.2mpg – and will only be offered on models fitted with Volkswagen seven-speed automatic gearbox.

The 48-volt electrical system recovers energy that would otherwise be wasted when decelerating, redeploying up to 16bhp and 25Nm of electric boost under acceleration. Volkswagen says the system will make moving away from a standstill much smoother. 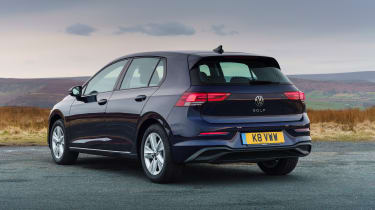 Volkswagen will launch a further two electrified variants of the Golf – a new mild-hybrid, based on the entry-level 1.0-litre three-cylinder engine and a new version the plug-in hybrid Golf GTE.

The latter will be the  hot Golf to reach the showrooms. Like the previous model, the GTE will be powered by a plug-in hybrid system based on a 148bhp turbocharged 1.4-litre petrol engine. However, its electric motor is significantly more powerful, so the system’s overall output now stands at 242bhp – which is the same as the outgoing Golf GTI Performance.

Battery capacity has increased, too. The new 13kWh unit gives 43 miles of zero-emissions range, at speeds up to 87mph. The battery also is more energy-dense than in the previous generation GTE which means that, despite a 50 per cent increase in capacity, it’s physical size has only increased fractionally.

Performance-focussed models, like the GTI and R will be the last to arrive. According to leaked internal documents, the R is set to muster up 328bhp – 32bhp more than the last version. Insiders tell us that mild hybrid assistance is set to feature, most likely in the form of a lag-eliminating electric turbocharger, similar to the system used by the Audi S7.

A less well-equipped, base-model version of the Golf will also be released later this year, along with the sports-inspired Golf R-Line. The latter will sport an aggressive body kit, a new rear wing, fresh alloys and a range of “R-Line” badges.

From the outside, the biggest change comes at the front, where a low nose features a slimmer grille. It’s flanked by narrow headlights – featuring standard LED tech – whose winged edges flow into sharp creases along the side. The bumper varies according to trim level – the Style trim features three distinctive fins spanning the width of the air intake, while the R Line features a more open front vent with R badging.

It’s on the inside where the most interesting changes have taken place. Gone is the staid look of the Mk7, replaced by a minimalist look that’s as contemporary as anything in this class. The interior is dominated by a pair of screens. The first, a 10-inch infotainment system, features a customisable display, which allows the driver to position shortcuts and widgets in the desired positions. Both Android Auto and Apple CarPlay are standard, and the latter can now be operated wirelessly.

The main infotainment screen sits in a single panel alongside the latest version of Volkswagen’s virtual cockpit. A digital instrument binnacle, measuring 10.25 inches, is fitted as standard across the range – a first for the segment.

Almost all traditional switches have been replaced by touch-sensitive surfaces. The temperature can be adjusted by sliding a finger across a panel at the base of the 10-inch display; likewise for the volume controls. Even the sunroof forgoes a physical switch; instead requiring a quick finger sweep along a small panel on the roof.

It means that, on the dashboard at least, the only physical button that remains is for the hazard lights – though there are still conventional buttons on the steering wheel and in the door panel for the window and mirror adjustment.

The technology won’t stop with the interior, either. The new Golf features unrivalled connectivity for its class, with each model packed full of safety tech. A semi-autonomous function allows the Golf to accelerate, steer and brake on motorways at speeds – where legal – of up to 130mph.

Perhaps most intriguing of all is the Car2X system: this allows connected cars from any manufacturer to broadcast in real-time, warning other enabled vehicles of hazards on the road ahead, or the proximity of an emergency vehicle trying to make its way through traffic.

Do you like the new Volkswagen Golf Mk8? Let us know what you think in the comments below…