The next BMW 4 Series Coupe will be officially revealed later today, but we have already seen a glimpse of the new car in what appears to be an official image leaked online. The radical design overhaul that has been on the cards for the new 4 Series is confirmed along with the oversize front grille that's been attracting so much interest in the run-up to today's launch.

As expected, the nose of the new BMW 4 Series is dominated by a pair of large, vertically oriented kidney grilles, quite unlike those on the current 3 Series saloon it shares its platform with. As such, BMW will employ a new strategy with its new coupe. Until now, it’s been intrinsically linked to the 3 Series, but the brand will clearly market the newcomer as much more than a sibling to the saloon, with an entirely separate design. No other information has been published so far.

The new 4 Series is being pushed through the final stages of its development cycle, with the latest spy shots showing a lightly camouflaged test mule undergoing handling assessment at the Nurburgring. It will go on sale later this year, with four and six-cylinder power anticipated. A convertible will follow, as will a hot M4 version.

Before the leak, BMW had released some official images of the new 4 Series Coupe – and while the car in those pictures wears heavy camouflage, our spy photographers had also spotted a range of scantily clad test mules elsewhere – giving us a good indication of the styling. The big talking point is the car’s new front end.

Elsewhere, the 4 Series Coupe’s styling is almost identical to the BMW Concept 4 from the 2019 Frankfurt Motor Show. A pair of slim LED headlamps, flared haunches, and a squared-off tail all feature. 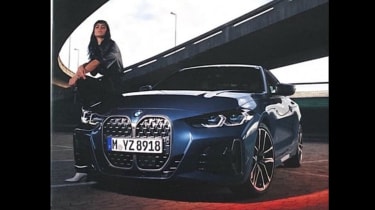 The 4 Series line-up will show an increased focus on performance. We expect a hot M440i xDrive variant to arrive early marked out by a more aggressive body-kit and will be powered by a 369bhp turbocharged 3.0-litre straight-six engine, which will send its power to all four wheels via an eight-speed automatic gearbox.