There’s no doubt ceramic is the buzzword in the car care world at the moment, and we will be testing sealants using the latest tech in the months ahead. But this test was focused on more conventional products. They may not include ceramic particles but they are packed with technology, and range from water-like sealants to hard waxes that come in a tin.

And judging by how some of them flagged during our six-week test, unless you applied the very best when you were preparing your car for winter, they will need topping up or swapping to something more effective by now.

Cleaning the car will tell you how the paint has fared during the winter. If there are swirls, depending on their severity, use a polish or scratch remover on them. Slip your finger in a plastic bag and run it over the bonnet, boot or roof. If it feels like sandpaper, the paint will need claying before applying a wax or sealant.

The choice of what to put on to seal in that shine is wide, so we applied 24 to a clayed and cleaned bonnet to the maker’s instructions.

We assessed how easy each was to put on, then how well they beaded water over the six-week test. With prices ranging from less than a fiver to more than 10 times that, we factored in cost, taking in to account a hard wax goes a lot further than a liquid sealant. Despite this, our focus was mainly how well each performed.

Previous winner Bilt-Hamber has clung onto the top spot yet again with its unbeatable combination of performance and price. Autoglym came in second thanks to its pioneering technology while Simoniz came in a respectable third.

In previous tests, rivals have run Bilt-Hamber’s double speed-wax close, but it was a clear winner here during our wet, but not too cold winter. It beaded strongly throughout, to the point where it was hard to fill its section. It’s not the easiest to apply and must be left for five to 10 minutes to haze, but the effort is well worth it. And, unlike some rival hard waxes, it’s easy on the pocket, because this price includes a microfibre cloth and a sponge applicator.

Sealants are an easy-to-apply alternative to hard waxes. Autoglym’s established Extra Gloss Protection is a pioneer of this technology, and got the closest to our winner. We’ve not tested it for a while, so the formula may have been tweaked, but it was mightily impressive, working strongly right to the end. It goes on easily with very little effort, but you do have to wait for 30 minutes for it dry before buffing. 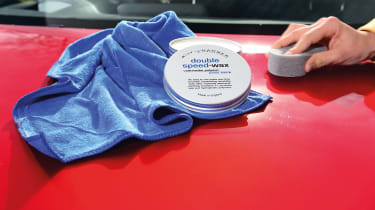 Another veteran completes our top three, and they don’t get much more old school than this Simoniz wax. From its retro livery to the hard wax itself, this is a blast from the past. But, as we’ve seen in multiple tests, it works, and shows many far newer solutions the way. The wax is hard and requires a fair bit of effort to apply and buff, because you don’t let it dry. But it gives great performance for a cracking price.

An impressive debut in our test for this new brand from CarPlan owner Tetrosyl. Aimed at the enthusiast detailer, Car Gods 54 has a wide range, covering almost all car cleaning and protecting jobs. Athena is a cream-like liquid that goes on with a damp cloth before being allowed to dry for buffing. It started the test strongly but was a touch behind the leaders by the end, although it was clearly still working.

Another promising debut, this time by Autobrite Direct’s new Hellshine range. We tested a sample of The Abyss, but the full-size 175g version will set you back a hefty £65. It is officially called a synthetic paint sealant, but its maker says it behaves like a wax, and it certainly goes on like one. Autobrite says it provides up to 12 months’ protection, so there’s no surprise it easily made it through our six weeks with no sign of flagging.

Two for Autoglym in our top 10, and this is from the opposite end of its range. This is the firm’s ‘finest wax’ and contains an organically refined form of carnauba wax. Ultra HD works well, clearly present at the end of our tests but struggling more than some to shift water when it was dirty. It comes with a microfibre cloth and foam applicator puck, but you can’t ignore the hefty price for 120g.

A sound showing from Black Diamond, which makes a habit of producing good-performing products at low prices. The formula is a mix of silicones and waxes, including the key one for cars – carnauba. The product goes on easily and, as we’ve come to expect from Black Diamond, there’s no unnecessary fragrance added. It was a step behind the front-runners but was still working at the end, albeit a little more slowly than some.

StjÄrnagloss is back in the UK after an absence of more than five years, with a new range of reformulated products under the wing of detailers’ favourite Dodo Juice. This hybrid wax is claimed to be better for hiding swirls and marks in tired paintwork than a sealant. The green wax with its sweet fragrance goes on easily and buffs quickly after being left to haze. It’s not the fastest shifter of water, but it was still working at the end. It’s expensive, though.

When Armor All’s Shield arrived in 2012, it shook up our tests, taking a debut win a year later. And it did so with an innovative product that was very easy to apply and lived up to its ‘better than a wax’ claim. The Shield name spread to other products, and this original is now in a trigger pack. Somewhere along the way it lost that great protective edge, though. It still worked throughout our test, but others have raised the bar.

Supernatural Hybrid Nano has been around for a few years, but it has been upgraded by the Essex producer with silicon dioxide ingredients. Dodo Juice says this gives it the advantages of a wax when it comes to filling swirls and marks on unmachined paint, giving the chemical resistance and adhesion of a sealant. It is not the fastest water shifter, but it showed no signs of slowing in our test. We tested a sample, but a 100ml jar costs £40.

Now you can pick out the best polish, why not take a look at the best glass cleaners on sale?