A set of protective floor mats is a fraction of the cost of new carpets and a great investment. By keeping your car neat inside, you’ll increase its value come resale time. Fully tailored sets fit and look better, but are more expensive. Universal sets are the cheapest, but it’s a lottery whether they suit the footwells. In general, trim-to-fit offers the best compromise.

The choice of materials is generally carpet – which can be easier on heels – or rubber, which tends to be better at repelling mud and water. Some sets feature both, but which is the one to protect your car’s floor? We fitted eight sets to find out.

We checked how well the universal mats fitted our test car and how closely the trim-to-fit products matched the footwells. We next used a wire brush on the carpets and rubber surrounds to recreate everyday hard usage. Then we ground in a mixture of salt and grit, vacuumed it off and assessed the results.

We shuffled the mats to make sure they stayed put – some relied on an anti-slip backing, others on small rubber ‘nibs’ that dug into the original carpet. A heel pad gained extra points. Finally, we took into account price from makers and online sources.

Mixing carpet, rubber and trim-to-fit with a good price took Sakura to a win. The all-rubber Michelin 98016 remains a good bet for harder use, and Sakura grabs another podium with the pricier AWM0001.

This Sakura set is almost universal, but with a few trim lines giving it a foot in each camp. The fronts are impressively big, with a maximum length of 70cm, and the 45cm width filled most of our test car’s footwells. We could see no sign of carpet or rubber damage from the wire brush or grit.

Both front and rear mats mix carpet and rubber sections in a practical and attractive manner. We trimmed the rears slightly to fit well. Being large, they’d be fine for bigger cars, too. Tough, large and versatile; at this price, hard to resist.

Our previous winning cut-to-fit set still impresses with its quality. It’s one of only two products with no carpet – ideal if you want to hose the mats down. And you may need to because the design provides a lot of traps to collect water, mud and grit. Stability is handled by nibs and cleats.

The identical front mats were plenty long enough for our test car, at 70cm, but they narrowed towards the foot end, leaving some carpet exposed at either side. The rears provided plenty of coverage and extended well under the front seats, giving an almost perfect fit overall.

Unlike the other Sakura Set, this is a full-on trim-to-fit quartet, with multiple cut lines on the fronts. They are made from rubber with a large carpet area to the rear. The fronts are mirrored, with no actual heel pad but a differently contoured rubber section.

We found that the carpet fluffed up noticeably with the wire brush and grit vacuuming. The usefully wide rears sat nicely under the seat, and at the front the mats went well into the footwells, being the longest here, at 73cm. Overall a good set, but still a bit pricey. 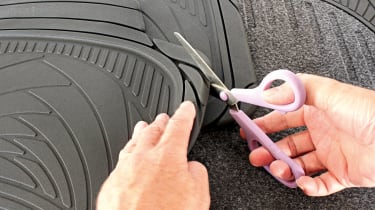 Another set that’s almost universal, but with a few flexi lines to help it push into the contours of the floorpan. We liked the stylish appearance of the fronts; the passenger side is divided into three carpet areas, while the driver’s mat features a wide rubber section right across its middle.

The rears were a great fit and the fronts were good, too, aided by their 66cm length. We’d have liked more width in the pedal area, though. The carpet fluffed up more than we’d wanted, but the rubber was unaffected. Being the dearest can’t be ignored, however.

Halfords calls these mats “universal”, but they include a handful of cut lines. Carpet is fitted about halfway along the virtually oblong fronts, which then changes to contoured rubber. At 66cm long, they went well under our test car’s pedals. There are cut lines down one side, yet only at the lower rear of the other, which could be a bind.

The rear mats are rubber only and usefully wide. Despite a lack of lines, they are thin enough to be cut to shape under a seat. Our wire brushing didn’t affect the rubber, but it did create a fair bit of carpet fluffing.

The second of the non-carpet sets we tried is PVC rather than rubber, and the cheapest we put to the test. Unsurprisingly they are quite thin, which made cutting easy, although there are only a few trim lines on the fronts. Despite this, the fit was good and virtually all the carpet was covered. However, unlike with the Michelin 98016, there were no deep areas to trap mud and grit.

The rears are usefully large and have more cut lines than the front so we got an almost perfect fit. Not stylish or fancy, but large and cheap.

A genuinely universal set, with all mats carpeted and the fronts mirrored. The driver’s side has a soft rubberised section from the heel position, up under the pedals. The rear carpets are simple oblongs, and fitted between the runners, but their limited length meant they left plenty of exposed carpet. At the front, the short length meant they barely reached the pedals – something that limits effectiveness, especially on bigger cars.

We found virtually no fluffing of the carpet when carrying out the wire brush and grit tests, and only a small mark was left on the rubber.

The Halfords universal set is very like the Ring RMAT31. Its similarly hemmed carpets feature larger oblongs for the rear, which just cleared our test car’s seat runners, but also left plenty of carpet open to either side.

The driver’s-side front mat has a reinforced-carpet section across the whole mat as a heel pad. We found there was a little fluffing from the wire brush, but nothing serious. The fronts were better contoured around the central tunnel, and being a little longer, at 58cm, helped. However, they still left unprotected areas at the rear and sides.