The Audi Q8 is luxurious, extravagant and stylish, and makes an admirable executive express for owners who aren’t too worried about its rather obvious packaging compromises. It takes up about as much room on the road as a Q7 SUV, but has only five seats and a much less useful boot. In spite of its more dynamic and contemporary styling, it doesn’t offer significantly more involvement or engagement for the driver either, and is less sharp on the road than the BMW X6, a key rival.

But the Q8 offers good road manners and superb refinement, as well as a plush ride – if you avoid Dynamic mode – and fabulous interior ambience with its twin-touchscreen interior and lavish appointments. As such, it’s a thoroughly appealing choice for drivers who place style and comfort above sports car-like driving responses.

The Audi Q8 is a large and luxurious SUV crossover that’s focused almost entirely on road use, and aims to seduce drivers who might otherwise consider other ‘sporty’ lifestyle SUVs for sale, such as the BMW X6 and Mercedes GLE Coupe. Porsche Cayenne and Range Rover Sport buyers might take a look too, although the Q8 is undoubtedly aimed primarily at the ‘coupe-style’ 4x4s from BMW and Mercedes.

The big Audi is a sister model to the Q7 off-roader, and shares its underpinnings. However, the sleek body is lower, wider and shorter than its more practical stablemate, and also a lot more aggressively styled with Audi’s latest eight-sided grille, swoopy headlamps and wide wheelarches said to be inspired by old Quattro rally cars. At the back, there’s a full-width LED lighting strip, roof spoiler, and a rakish ‘fastback’ tailgate that seriously limits the practicality of the boot. Unlike the Q7 you can’t have a third row of seats either, so the Q8 is strictly a five-seater.

There’s a diesel mild-hybrid and petrol engine available at present, but more engines are to come. All Q8s feature quattro four-wheel drive, along with an eight-speed auto gearbox. Inside, there’s a significant upgrade over the Q7 with an interior that looks much like the latest Audi A8 limousine – complete with the twin-touchscreen MMI dashboard and Audi’s impressive Virtual Cockpit instrument/info pack. 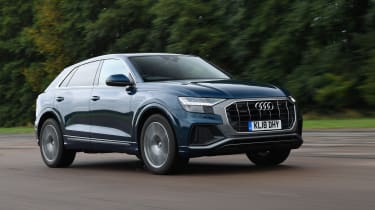 Two performance versions of the Q8 are also now available: the SQ8, which has a 429bhp V8 diesel engine, and the even more hardcore RS Q8, which is powered by a 592bhp petrol V8.

The regular Q8 is available in three trim levels, S line, Edition 1 and Vorsprung, and all are well equipped, although the S line is less lavishly indulgent than the Vorsprung model. The latter version comes with a seriously impressive amount of safety kit, including Audi’s latest autonomous systems – although the S-Line isn’t exactly hard done by.

With its eye-catching styling and significant road presence, the Q8 is not a car for shrinking violets. As if to back that up, the options list includes bold body colours like Galaxy Blue and Dragon Orange, as well as the more restrained and traditional Audi SUV hues. Other popular options are likely to be S line sports seat upgrades with integrated head restraints and diamond stitching. S line models ride as standard on 21-inch alloys, but the larger 22-inch wheels from the Vorsprung are likely to be a popular upgrade too.