Much as with its predecessors, the new Yaris is a car that focuses on efficiency and ease of ownership more than cabin trinkets. But these qualities have rarely been more relevant than now, and the fact that the Mk4 behaves so well on the road brings it right into the reckoning. It’s already safe to say that this is the most complete small Toyota for quite some time; and that we’re keen to see how UK specs and prices stack up.

For many, the Toyota Yaris is a supermini that has been a bit too anonymous for its own good. Never as affordable as a Vauxhall Corsa or a Ford Fiesta, frequently behind on in-car tech compared with a VW Polo, and almost always dowdy-looking beside a Peugeot 208 or a Renault Clio.

And yet the Yaris is the fifth best-selling supermini across Europe and an enormously important car for Toyota, because it accounts for almost one in four of the cars the company sells in the region. So the stakes are high for the new, fourth-generation Yaris – and Auto Express has had the first chance to drive the car on public roads.

Despite previous sales of more than four million units, this could be the first Yaris that ends up on many supermini buyers’ shortlists because, of course, it’s a hybrid. Which is to say that while there will be a 1.5-litre manual petrol version (and the UK may, in time, also get a 1.0-litre model), the vast majority of Yaris sales in British dealerships will be electrified. More than ever, this could be one of those moments where the market and customer trends move towards a model.

The outgoing Yaris had a hybrid version, of course, but the new model looks set to make a much stronger case for itself through an all-new platform, a fresh look, a state-of-the-art powertrain with a different type of battery, and several class firsts on safety equipment.

Let’s start with the platform. This Yaris sits on the Toyota New Generation Architecture, the same core chassis components that have already impressed us in the C-HR and Corolla. In the case of the Yaris, it uses what Toyota calls GA-B – the new, downsized version of the platform. But the gains TNGA offers this car over its predecessor are considerable.

TNGA is inherently much stiffer than the Toyota B platform that underpinned the Mk3 Yaris. Overall, the car has 37 per cent more torsional rigidity – helping handling and giving Toyota’s engineers extra scope to cut down noise.

Up front, there are MacPherson struts, configured at a new angle designed to reduce the amount of transference of noise and vibration up through the chassis. At the rear, there’s a torsion beam that is a full 80 per cent stiffer than the old cars – and this, Toyota claims, has allowed the engineers to soften the springs and improve the ride without losing body control.

This Yaris also bucks industry trends by being slightly smaller than the car it replaces. It’s 3,940mm long, so under the magic four-metre mark, but its wheelbase has been extended by 50mm to 2,560mm in a bid to improve cabin packaging. It’s a little wider, too, and lower, giving it a slightly more dramatic look – although we’ll leave you to form your own views on styling, including the pronounced surfacing around the rear wheelarches.

Under the bonnet is an all-new version of Toyota’s hybrid powertrain. There’s a 1.5-litre normally aspirated three-cylinder engine, backed up by a new version of the Power Control Unit that has been developed in countless Toyota hybrids for more than two decades. It’s capable of adjusting the mix between electric power and petrol power more than 10,000 times every second.

Crucially, too, the Yaris’s battery tech moves from nickel hydride to lithium-ion, giving this hybrid much more scope to deliver strong, punchy electric torque, and to recoup energy that would otherwise be wasted during braking. This extra potential is the key, engineers claim, to reducing the ‘rubber-band’ rises in revs that occur when the driver quickly applies more throttle.

On paper at least, the Yaris’s numbers make impressive reading. Total system power is 114bhp – enough for a sensible 0-62mph time of 10.3 seconds. And the efficiency figures are pretty dazzling, when you consider that this is what Toyota terms a ‘self-charging hybrid’, without the need to plug it in.

The electrified Yaris emits just 86g/km on the tougher WLTP test regime (64g/km on the correlated NEDC cycle), giving it fuel economy of around 105mpg. And Toyota claims that in urban driving situations, the lithium-ion battery pack’s improved performance should allow you to spend as much as four fifths of your time on electric power, without using a drop of petrol.

On the road, the first thing that strikes you isn’t the powertrain but the chassis – because as with the larger TNGA models above it, the Yaris’s base is an excellent one. Body roll and head toss are well contained, and while the torsion-beam rear can leave the car a little susceptible to lateral jolts, such as from drain covers at the side of the road, they’re rarely a problem. The overall set-up strikes an appealing balance between composure and comfort. 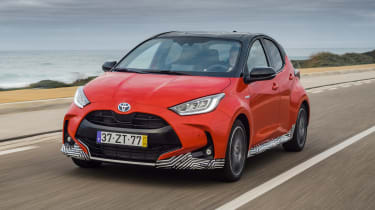 It will hardly surprise anyone these days to learn that the steering has precious little feel but it’s a quick enough configuration for the Yaris to feel responsive, especially around town. The turning circle is among the smallest in the class, Toyota claims, and this is certainly a car that feels adept at nipping down narrow streets and through small gaps in traffic.

The powertrain plays its part in this too, because it is noticeably more comfortable with the life than the Mk3 Yaris’s system. That extra grunt from the electric side of the partnership means that the engine is much less likely to cut in after a few seconds, and you’ll find yourself much more able to keep up with traffic without using petrol power at all.

Did we stretch to 80 per cent of the time on electricity? Hardly. But even a couple of hours behind the wheel is enough for you to begin to learn the system’s characteristics and modulate your right foot to get the blend of performance and efficiency that suits you.

Stamp on the right-hand pedal and yes, you will hear a drone as the engine kicks in and tries its hardest to keep up with your request for maximum acceleration. But a sensible approach delivers an experience not dissimilar to a conventional automatic gearbox – and all the while, the transitions between electric and combined power are supremely smooth. Even on a motorway – a regular bugbear of hybrid users over the years – the Yaris does a remarkable job of cutting out the engine wherever possible, at up to 70mph.

If anything, fast but twisty roads are where the hybrid systems reach their limit – because no matter how good they are, they’re still one step short of a regular motor and, in particular, a manual gearbox when it comes to offering involvement. There are no steering wheel paddles or false ratios to play with because the system is just not designed for that sort of driving. So while you can enjoy crisp turn-in and flat cornering, you’re unlikely to feel part of the action.

This trait is all the more frustrating because it emerges just as the chassis feels ready for some more action. Never mind the bonkers GR Yaris; we reckon a 180bhp turbo petrol Yaris with a six-speed gearbox would be a hoot.

Either way, factor in city driving, that new-found motorway prowess and general cruising and you’re left with one of the more refined superminis. Even when the engine kicks in, the hybrid system means that it’s more of a distant, slightly grumbly drone than anything else.

If the hybrid system is something of a triumph, the cabin could still be the Yaris’s weak point. There’s enough space for two adults up front but taller grown-ups won’t be happy in the back seats – or at least, not as content as they would be in the latest Clio. And the same goes for the boot space, which looks respectable, at 281 litres, before the Renault’s cavernous 391-litre capacity is taken into account.

In-car tech isn’t quite the nightmare it once was – but only because Toyota has finally seen fit to offer both Apple CarPlay and Android Auto. Selecting either of these phone-based systems will allow you to avoid Toyota’s own interface, which is still clunky and hampered by comically old-looking graphics. At least the head-up display on our test car worked well, showing all relevant information clearly while minimising the amount of time you need to look away from the road.

The standard dash below it is still fairly plain in design, and there’s no way the Yaris is going to get a fully digital display to match the likes of the Polo and even SEAT’s Ibiza.

Our early car wasn’t entirely representative inside but from what we’ve seen so far, the Yaris will be up with the class best on build quality, but maybe half a step behind the leaders on flair and materials. Expect lots of high-grade grey plastic, although there are occasional flourishes of fabric to soften the mood.

Specs have yet to be confirmed but we know that every Yaris will come with a new evolution of Toyota Safety Sense as standard. So even the basic version will get Adaptive Cruise Control that can operate at motorway speeds or in stop-start traffic, plus lane trace assist and emergency steering assist. There’s also a new feature that will watch for pedestrians crossing streets that you’re turning into, and bring the car to a halt if it feels a collision is likely.

The tech that matters, it seems, is under the Yaris’s skin. Much as with its predecessors, this is a car that focuses on nailing the basics more than cockpit trinkets. And in that respect, it is the most convincing and, dare we say it, relevant small Toyota for many a year. All that’s left now is to see where UK prices sit in the market when the car goes on sale here in the autumn.