The new MINI Electric is a curious car. For many, the fact that it looks, feels and drives much like a normal MINI – albeit with an electric motor and unique badging – will be part of the appeal. And its undeniably modest range won’t matter at all. Yet others will wonder why it lacks the flair and individuality of cars like the Honda e. Either way, it’s a solid first effort, and one we’re very much looking forward to trying properly in the UK in the coming months.

It should be a marriage made in heaven, shouldn’t it? One of Britain’s most iconic cars that’s small, nimble and with famous ‘go-kart’ handling, paired with an all-electric powertrain that brings instant acceleration, cheap running costs and silent running.

So is it? We were impressed when we first drove the car in Miami, so what’s the MINI Electric like on home turf?

The simple answer is really good. As you’d expect, the fun factor is raised a notch – we had as much fun behind the wheel as in the many fast MINIs we’ve driven before. Nothing prepares you for that instant shove in the back from the 181bhp electric motor (the 0-62mph time of 7.3 seconds doesn’t do it justice), while the MINI remains as chuckable as ever.

The 32.5kWh battery pack sits beneath the back seats and down the spine of the car keep the centre of gravity low, so accelerating into a corner and lifting off does little to alter the car’s trajectory.

Even on the motorway if you decide to pin the throttle to the floor, there’s still a fair amount of shove to bring a smile to your face, while it’s quiet, too. Electric car acceleration is addictive – even more so in a car that’s just designed to make you happy.

Most MINI Electric buyers will probably just leave their cars in standard mode, although Sport and Green seem to do little more than sharpen or soften that instant response slightly. There’s a Green + mode that softens many of the car’s features like the climate control, upping the range by way of a thank you.

And let’s deal with that range while we mention it. In a world where a 200-mile range seems to be the minimum, the MINI has an official maximum of 144. Hmmm.

Let’s not dismiss that as being nowhere near enough just yet, though – it’s not as though MINI hasn’t thought about this. Back in 2011, MINI ran a trial of electrified MINIs in the UK and the average daily distance the 130 or so users clocked up was 29.7 miles, actually slightly more than the UK average. So a full charge, which takes two and a half hours from a 11kW home charger, would only really be necessary a couple of times a week. And the cost per charge is likely to be around £4. 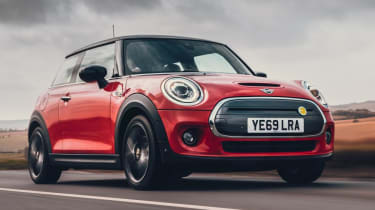 Sure, the range might limit the MINI’s appeal as your only car, but for most people most of the time, it might do just fine.

Now, back to the drive and another impressive feature given the MINI’s history and the weight of the battery pack: it actually rides quite nicely. It doesn’t exactly glide over bumps and you’d neither expect nor want that in a MINI, but it’s more comfortable than you might expect, especially if you’re moving to electric ownership from an older MINI.

You’ll have to get used to the brakes grabbing as much energy to feed back into the batteries as they can, although there are two brake settings. We preferred the stronger of the two, although it’s more forceful than on many other EVs. Learning how to use the brakes to best effect adds to the fun, though, but you can use a more normal setting, which is more akin to lifting off in a petrol MINI.

The rest of the car is pure MINI, with the addition of some EV-centric bits inside and out and the new digital display from the latest MINI GP Works in front of the driver – in true MINI fashion, it’s a cool bit of kit, too.

The boot’s not huge, the rear space likewise, but the build quality is special – as you’d expect from a BMW group car – and the kit list, even on the level one car, is pretty good.

MINI has tried to make it simple when choosing your car, too – you opt for levels one, two or three; the only options are styling-related.

Sat-nav is standard on every car, although Apple CarPlay and Android Auto is also fitted, plus climate and cruise control. Level 2 ups the price by £2,000 and adds a parking camera and part-leatherette heated seats, while our level 3 car costs a further £30,400 but adds a Harman Kardon stereo, a panoramic roof, a larger central screen and full leather.

Prices start at £24,400 (assuming the government’s £3,500 EV grant remains post-April) making the MINI a cheaper proposition than the Honda e, likely to be the MINI Electric’s chief rival – for now at least, while the MINI will go further on a single charge, too.

The MINI might not be as wacky as the Honda with its full-width dash and cameras instead of door mirrors, but it’s more MINI; more restrained, more British, but still a whole heap of fun.

Our sister site DrivingElectric has named the best small electric cars on sale. Take a look…